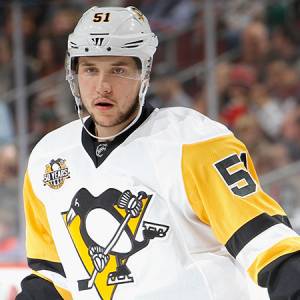 Derrick Pouliot is a Canadian professional ice hockey player who plays in the National Hockey League(NHL). As of 2019, Derrick Pouliot currently plays for the Vancouver Canucks as their Defence. Derrick Pouliot has played for other teams like Pittsburgh Penguins, Portland Winterhawks and also in the several other leagues.

Pouliot reportedly earns around $1,100,000 as his yearly salary from Vancouver Canucks. Further, Derrick Pouliot has an estimated net worth of over $2 million. Currently, Derrick is dating his girlfriend Amanda Kuhl.

Let's take a look at Derrick's career earnings until 2019:

Derrick is currently in a romantic relationship/affair with his lovely and gorgeous girlfriend Amanda Kuhl. The beautiful couple had registered their wedding venue and date which is June 19, 2019, as claimed by the website www.Potterybarn.com

What a magical Halloween ?? pic.twitter.com/Wjj2ydHsh0

So far Derrick is living happily with his girlfriend and soon they are planning to get married on June 19, 2019. Amanda seems to be happy for being the wife/spouse of famous NHL player Derrick.

The height of Derrick is 6 feet and weighs about 94 kg. He's not just an athlete of world-class, but also a very attractive person.

Derrick Pouliot was born in Estevan, Saskatchewan, Canada on January 16, 1994. He is Canadian according to his nationality and belongs to the ethnic group of white people. In addition, Capricorn is his star sign and he grew up with his brother Nick Pouliot.

The media do not disclose detailed information about his educational qualifications and also about his family.

Derrick started his professional NHL career with the Pittsburgh Penguins in 2014. Besides NHL, he also played in the Western Hockey League and in the 2012 World Junior Ice Hockey Championship.

After scoring his fifth career goal in a 2- 1 Canucks victory over the Edmonton Oilers on March 29, 2018, Pouliot set an NHL record for most goals scored from the beginning of a career, all of which were game-winning goals.

He began playing for the Vancouver in 2017 after being traded to it by Penguins and signed his contract of one year in June 2018.