Tony Cingrani is an American professional Baseball player who plays in the Major League Baseball (MLB). As of 2018, Tony Cingrani currently plays for the Los Angeles Dodgers as their pitcher. Previously, Tony played for Cincinnati Reds.

As a pitcher, Tony Cingrani reportedly earns around $2,650,000 as his yearly salary from Los Angeles Dodgers. Further, Tony Cingrani has an estimated net worth of over $3 million. Additionally, the rumors about his wife or girlfriend are not media yet.

Tony Cingrani was born on born July 5, 1989, in Evergreen Park, Illinois to parents Anthony Cingrani Jr. and Deborah Cingrani. As per his nationality, he is American and belongs to White ethnic group. Further, his star sign is Zodiac. Besides, the detail about his siblings is still under the rock.

Thank you all for the birthday wishes! For my birthday wish, let's vote my former teammate, Anthony Rendon to the ASG #VoteRendon

Before playing professionally, he played in the Lincoln-Way Central High School and also played for South Suburban College. Later, he joined Rice University, playing for the University team.

In his junior year, his first year in Rice, Cingrani struggled as a starting pitcher, pitching to an 8.59 earned average run( ERA) in six games, registering  16 walks and 13 strikeouts.

Tony Cingrani Salary and Net Worth

Further, the MLB player has an average salary of $2,650,000 annually while Clayton Kershaw is the highest earner with an annual salary of $31,000,000. Additionally, Tony Cingrani so far has made earnings of $6,142,106 from his entire MLB career while Mike Trout is among the highest earner among the MLB players with the total earnings of $81,356,792.

Unlike his professional career, it was a tough task to find out about his personal life and importantly about his marital status. Reportedly, he is unmarried and additionally, there aren't any rumors about his probable wife or girlfriend. 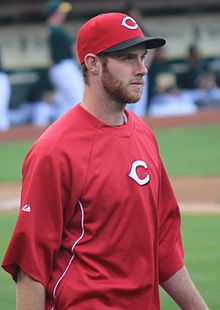 Further, Tony has kept his personal life low profiled. Further, he hasn't dropped a single hint about is relationship status. However, he might be in a secret relationship with his probable wife or girlfriend.

Additionally, the information about his body measurement such as height, weight etc is still under the rock.

In the third round of the 2011 Major League Baseball draft, the Cincinnati Reds selected Cingrani in overall114th selection.

He got a breakthrough in the team afterJohnny Cueto was placed on the disabled list, on 18 April 2013, the Reds called Cingrani to take the starting spot for Cueto until Cueto had been reactivated.

During the spring training in 2015, the Reds announced that during the season Cingrani would serve as a relief pitcher.  The next two seasons for Cingrani would be mediocre With 5.67 and 4.14 ERAs respectively.

The 2017 season did not start better for Cingrani, who posted an ERA of 5.40 while playing for the Cincinnati Reds.

On 31 July 2017, Cingrani was traded to the Los Angeles Dodgers for outfielder Scott Van Slyke and minor catcher Hendrik Clementina.

Currently, he is playing along with his star teammates such as Kenley Jansen, Justin Turner and many more