Todd Reirden is an American professional ice hockey coach who most recently was the head coach of the Washington Capital of the National Hockey League (NHL) where he served (2018-2020). Also a former NHL player, he was drafted in the 1990 NHL draft withn242nd overall pick by the New Jersey Devils. Further, he played for Edmonton Oilers, St.Louis Blues, Atlanta Thrashers, and Phoenix Coyotes, retiring in 2007.

As of 2020, Todd Reirden's net worth is approximately $2 million. His source of income is widely considered his career in NHL initially as a player (1994–2007) and then coaching.

Mostly recently, he was fired by the Washington Capital from his roles as head coach where he signed a four-year contract until 2022. Though he has not revealed the exact figure of his salary and the contract with the team, his annual salary is believed to be no less than the seven-digit figure.

According to the source, An NHL coach's salary ranges from about $1 million to $5 million with an average in the $2.5 to $3.0 million. A coach's salary is guaranteed and if they get fired they will still get paid out the entirety of the contract.

Todd Reirden is married to wife Shelby Anderson Reirden for a two-decade now. The couple met in Texas while he played in the International Hockey League. The couple tied the knot in early 2000, in Indiana, and had their honeymoon in Hawaii.

After their marriage, Todd and Shelby decided to stay in Valparaiso. In May 2002, the couple welcomed their only son Travis who was born in Crown Point, Indiana with a disorder that leaves his body unable to defend against bacteria and viruses called Common Variable Immunodeficiency. 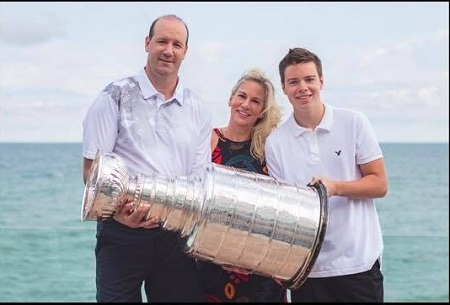 Todd Reirden with his wife and son SOURCE: Fabwags.com

Todd's wife, Shelby Reirden was born on June 1, 1970, in Indiana and graduated from Valpo High School. Currently, she owns the kids’ hair salon Locks Of Fun, located in 155 W. Lincolnway in Valparaiso.

In 2007, Reirden began his coaching job with the Bowling Green Falcons during the 2007–08 season as an assistant coach. On July 31, 2010, he was appointed assistant coach of the Pittsburgh Penguins, replacing Mike Yeo, who left the organization to become the head coach for the Houston Aeros of the AHL. On June 25, 2014, the Penguins announced that Reirden released from the team.

On June 25, 2014, Reirden joined the Washington Capitals as an assistant coach and was named the head coach of the team on June 29, 2018, replacing Barry Trotz.

During his first season as head coach, he guided Capitals to a 48–26–8 record and the top record in the NHL's Metropolitan Division, however, they lose in the First Round of the playoffs to the Carolina Hurricanes in seven games. Following the loss of Capitals in the first round of the 2020 Stanley Cup Playoffs, Reirden was fired from the team on August 23, 2020.