Todd Graham is a well-known American football coach. He recently resigned from his contract with the University of Hawaii in the Mountain West Conference. Graham led the Arizona State University to the Pac-12 South Division in 2013 and won the Pac-12 Coach of the Year Award.

Todd Graham was born Michael Todd Graham. He is among the two children born to Carol Graham and James Graham. Much about his parents and early life is under the radar. He has a brother Jim Graham. Todd graduated from North Mesquite High School and enrolled at East Central University.

Todd Graham has an estimated net worth of more than $5 Million. He credits most of his net worth to his successful career in American football. In 2020, Todd signed a five-year contract with Hawaii. As per the contract, Graham would make $760,000 in base salary for his first season, going up to $800,000 annually from 2021-24. 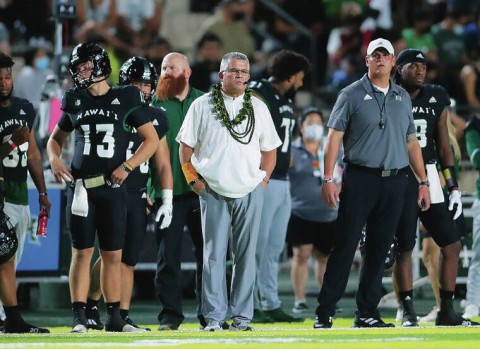 Todd worked as the head coach of Hawaii until 2021 seas SOURCE: Honolulu Star

Todd is living a happy married life and his wife and their children. Graham walked down his wedding aisle along with his longtime girlfriend, Penni. The love birds have been married for more than thirty years. They had a private wedding ceremony and have not shared much about their wedding.

Todd and Penni are the proud parents of six children Bo, Hank, Natalie, Haylee, Dakota, and Michael Todd Jr. His eldest son Bo has worked with him as their assistant coach with numerous universities. His son, Michael, plays with the University of Hawaii.

Todd represented High School in American football and played for East Central University as a Defensive back. After graduating from university, Graham signed a deal with Arizona Cardinals at NFL in 1987. However, Todd started working as an assistant coach for Poteet High School in his hometown. After spending two years with the school, The coach moved to East Central University as their defensive coach.

In the next few years, Graham worked with several High Schools. In 2003, Todd joined the University of Tulsa as their defensive coordinator for Steve Kragthorpe. He helped the  Golden Hurricane to two bowl games in three seasons. In early 2006, Rice University hired him as their new head coach. Graham was named Conference USA Coach of the Year. The coach joined back his former university, Tulsa, as their head coach the following year.

Graham earned a salary of $1.1 million with Tulsa and was the second-highest-paid coach in Conference USA, behind SMU's June Jones. In his first year, He led the team to the C-USA West Division title. After working with the team for three-season, He moved to Pittsburgh and then to Arizona State University.

Break From Working Career and Retirement

Todd led Arizona to the Pac-12 South Division Championship in 2013 and announced his retirement in 2017. However, To everyone's surprise, Graham returned from retirement and joined the University of Hawaii for two seasons. After completing the 2021 season, Todd announced his registration and termination of the contract.