A track athlete, Tim Montgomery won the Gold medal in 4×100 m relay category at the 1999 World Championships and 2000 Olympic Games. Tim Montgomery had money and fame, records, and endorsements and even a Nike commercial but his life collapsed when the United States Anti-Doping Agency (USADA) charged him with using illicit substances to improve his results.

Where Tim now? What does he do? Is he Married? Here we have everything you need to know about the former record holder track athlete.

Tim Montgomery Net worth and Earnings

Montgomery, 44, has made money and gained fame, records, and endorsements. He had originally won $25,000 for participating in any Tracy competition. Montgomery raised the fee of his sporting performances from $25,000 to $60,000 a run after breaking a world record of 9.78 times in the 100 meters. In fact, he made $575,000 a year from a sponsorship deal with Adidas.

Since he was caught using performance-enhancing medications, he began facing a financial crisis. He had to refund the prize money around $270,000- he won during the suspected time of cheating which he could not afford so he got into the drug business.

He once owned a chateau-style $2.5 million house in Chapel Hill, N.C., which he lost after failure to dop.

Tim Montgomery is in a marital relationship with his wife Jamalee Montgomery. The couple first met in 1999 and were in an on and off relationship for several years. Tim and Jamalee became the parents of their daughter named Tymiah in 2001. His daughter was 6 years old when he was sentenced to prison. 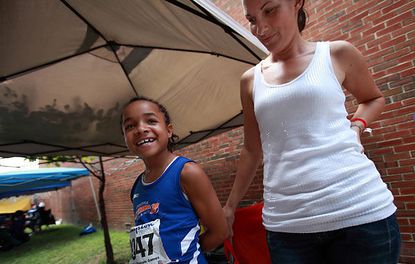 Tim Montgomery's wife Jamalee and their daughter SOURCE: The Virginian-Pilot

Tim got married to his girlfriend in 2009. His daughter has also taken up a track following her father's footsteps. Tim gave his daughter several running tips while he was in prison. Tim is also raising two other children from Jamalee's previous relationship. 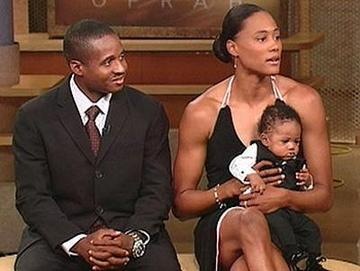 Tim Montgomery with his former girlfriend and daughter SOURCE: the ProTrack Forum

The tack athlete previously dated Olympic runner Marion Jones with who he also has a son named Monty. His girlfriend took full custody of their son while Tim was in prison.

Originally, Tim Montgomery (born 28 January 1975) was a basketball and football player. Tim has competed in many junior track competitions during his early days and did well in the sprint and relay sports. He won a silver medal at the 1996 Atlanta Olympics in the 400-meter relay, then a gold at the 2000 Sydney Games in the same event. He made a world record of 9.78 seconds to run the 100 meters in 2002.

Tim Montgomery Drug Use and Imprisonment

Tim was found responsible for using a drug that improves its performance. He was charged with conspiracy to possess more than 100 grams of heroin with intent to distribute. He was consequently given a two-year suspension.

In fact, his existing world record has been dropped. He announced his retirement in 2005 after all this incident. He had already completed his part in a cheque theft complot with a four-year jail term before that. Again in 2008, he was charged with the possession of more than 100 grams of heroin. He was eventually found guilty and jailed for five years.