Tim Beckham is a professional baseball infielder who plays for the Seattle Mariners of the Major League Baseball (MLB). Prior to that, he played for the Tampa Bay Rays and Baltimore Orioles. He was drafted by the Rays in 2008 and he made his debut in 2013.

Besides, this first overall selection of the 2008 MLB Draft, Tim, is currently living a luxurious lifestyle with his huge net worth of almost $6.5 million. 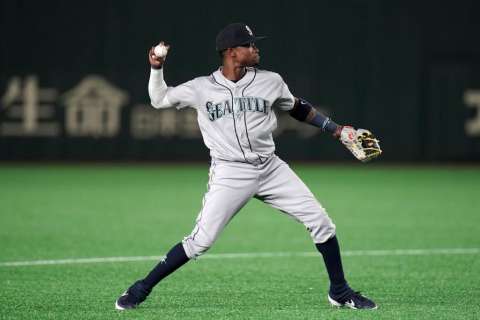 Besides, Tim also hasn't seen out with any girl. On the other hand, he also might be dating someone secretly as he has a private Instagram account so this is the reason why we couldn't claim about his likely girlfriend.

Tim Beckham stands at a perfect height of 6 feet and 4 inches. Likewise, he has a well-maintained healthy body that weighs about 95 kg.

Apart from that, he also has a website, which sells T-shirts with his name printed on it. The T-shirt costs around $28. Besides, Tim among the top-10 best-paid player of Seattle Miners while Felix Hernandez and Kyle Seager is the top-2 best-paid player with an annual salary of $27,857,142 and $19,500,000 respectively.

Tim Beckham was born on January 27, 1990, in Griffin, Georgia. He was born to his parents Jimmy and Ella Beckham as Timothy Lamar Beckham. Tim, often played baseball in his yard with his older brother Stephen and Jeremy.

Talking about his educational background, Tim completed his high school from Griffin High School and later he enrolled himself at the University of Griffin, where he also played college baseball in minor leagues.

Tim Beckham was the first overall selection of the 2008 MLB Draft, drafted by the Tampa Bay Rays. He played with the Princeton Rays of the Appalachian League the Hudson Valley Renegades, the Bowling Green Hot Rods of the Midwest League, and the Charlotte Stone Crabs of the Florida State League.

Later, in 2011, Beckham was selected to the All-Star Futures Game along with fellow Tampa Bay Rays prospects Hak-Ju Lee and Matt Moore. After the conclusion of the 2012 season, Beckham was added to the 40-man roster to be protected from the upcoming Rule 5 draft. He was optioned to AAA Durham on March 15, 2013.