How Much Is Tiffany Blackmon Net Worth & Salary In 2019?

Tiffany Blackmon is one of the renowned names in the journalism industry. Currently, she is working as a sports reporter for NFL Network where her salary is estimated to be $300,000 to $500,000 annually. 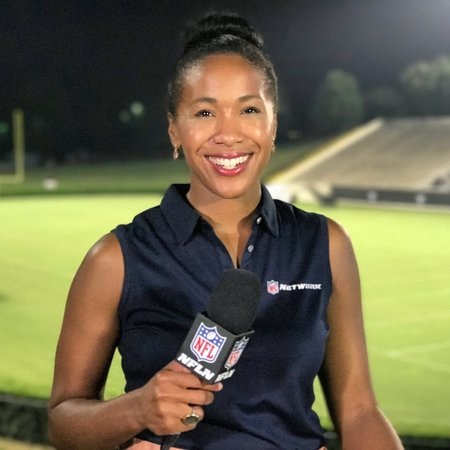 Though Blackmon's net worth is under review, by looking at her career we can assume her net worth is no less than the seven-digit figure.

Tiffany is neither married nor in a relationship. Currently, she is possibly single.

Blackmon has reached an age of 34 and has proved her career successful by her hard work and dedication towards work. She prefers to keep her personal life confidential. She has not revealed her personal affair and married life among media.

Besides her hosting and reporting career, she has a huge amount of love and affection to dogs and has done lots of programs to feed and give shelter to street dogs. Her love of dogs shows that she is a good human being.

She is very beautiful and gorgeous anchor who has been successful throughout her career. Being such a successful anchor, she has maintained her body measurements.

She has a wonderful height of 5 feet 8 inches which suit her personality.

Tiffany Blackmon was born on October 10, 1984, in Attleboro, Massachusetts. Her nationality is American and belongs to the black ethnic background.

She is the daughter of Jacqueline Blackmon (her mother) and Donald Blackmon (his father). She has a brother named Donald Jr. Blackmon and a sister named Candice Blackmon.

She attended the North Gwinnett High School, where she was a four-year starter for the high school volleyball team. She was named defensive MVP and overall MVP and was selected for All-Gwinnett County high school team. She was also selected to the All-State team during her high school career.

She then moved to Georgia State University in Atlanta after completing her high school education. There she played 49 games with the volleyball team. She has also played with the Panther's soccer team for four years. She completed her graduation from the university with a degree in Journalism and Telecommunications.

Blackmon put her first step into the journalism career joining the sports team of Oklahoma's News Channel 4. She started working at the NBC affiliate KFOR-TV in Oklahoma City where she covered the Oklahoma City Thunder as well as football at the University of Oklahoma and Oklahoma State.

She has previously gained more experiences serving as Sports Director at KXXV-TV In Waco, Texas and Weekend Sports anchor at KPLC-TV in Lake Charles, Louisiana. She then worked as an anchor and reporter for Comcast SportsNet Houston covering the Houston Rockets and co-hosting their weekly All-Access show. She has covered the Houston Texans, the University of Texas, Texas A&M and Baylor during that time. She has also hosted SportsNet Reports.

Blackmon worked as a reporter and Atlanta-based correspondent for NFL network in 2015. She has contributed to various field reports for NFL Network's shows such as NFL Total Access, Around the NFL, Path to the Draft, NFL GameDay Morning and much more.