2020 DBU Coach of the Year, Thomas Frank is a Danish professional football coach who currently is the head coach of Premier League club Brentford. Earlier, he had coached multiple Danish national youth teams as well as Brondby IF. A former amateur player, Frank had a stint with Frederiskvaerk BK.

Thomas Frank is currently under contract with Brentford which would last until 2023. However, the salary of the manager is not revealed but it was said that he agreed to a wage deferral to protect club jobs.

Reportadely, Brentford is married to Nanna Theil Frank. The couple share three children: Freja Frank. Alba Frank. and Bertram Frank. Prior to moving to London in December 2016, the Frank family lived in Hvidovre.

Unlike other wags and celebrity family members, Franks has always lived it low key.

In July 2008, Frank was hired as the manager of the Denmark national U16 and U17 teams. Under his name, he led the U17 squad to the European U17 Championship finals for the first time in eight years in 2011. However, Denmark lost to 2-0 against Germany. 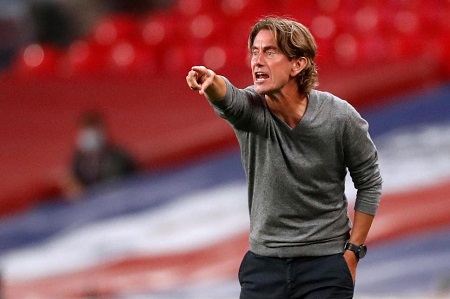 On 10th June 2013, Fran was appointed the manager of Danish Superliga club Brondby IF: his first position in senior football. In the 2013-14 and 2014-15 seasons, he achieved 4th- and 3rd-place finishes respectively, but failed to lead the club into the group stage in either season. On 9th March 2016, he resigned following criticism from chairman Jan Bech Andersen, under a pseudonym, on an online supporters' forum.

On 9 December 2016, Frank joined Championship club Brentford as assistant head coach. Following the departure of head coach Dean Smith on 16 October 2018, he was promoted into the role. In January, he signed new three-and-a-half-year contracts.

During the 2020-21 regular season, Frank managed Brentford to a second-successive third-place finish as well as went one better during the playoffs, winning promotion to the Premier League after a 2–0 win against Swansea City in the 2021 Championship play-off Final. The victory made Frank the second Brentford head coach to win promotion to the top-tier.