Born in 1998, Teven Jenkins celebrates his birthday on the 3rd of March every year. He hails from the suburbs of Topeka, Kansas. Likewise, he goes by the birth name of Teven Bradlee Jenkins, and his zodiac sign is Pisces. His father's name is Brad Jenkins, and his mother's name is Bridget Cushinberry-Razo. Unfortunately, Jenkins lost his mother when he was just 8 years old due to breast cancer.

As for his education, he first enrolled at Topeka High School. Following his graduation, he attended Oklahoma State University.

Teven Jenkins was interested in sports from a young age, either it was baseball or football, or basketball. He continued to play all of the three sports in high school days too.  However, his main focus was on football. And, by the time he graduated from high school, he was already recognized on the academic honor roll of his high school, became a two-time honoree on all-league, all-city, and Kansas all-state teams.

In 2016, he was redshirted, due to which he missed the whole season. In 2017, he committed to Oklahoma State University and began playing college football as an offensive tackle. In his freshman year, he was able to play in 12 games and contribute to his team's win.

In his sophomore year, in 2018, Jenkins started in 13 games and showed a brilliant display. His hard work provided him the opportunity to captain his team against Kansas State. With him by the side, the OSU team created a record that the team hadn't made since 2012. His performance also led him to win the Barry Sanders Award for most contribution with the least recognition.

In the upcoming years, he continued to perform well for his team and contribute to the team's win. Much like last time, he also captained his team on several occasions. He won the OSU Thurman Thomas Award (in 2019) and got mentioned in First Team All-Big 12 (in 2020).

Teven Jenkins has shown an incredible display of his talent during his college football days. He has led his team to many wins, either as a player or as a captain. Considering that, it must be sure that he was paid well by the college team. So, how much did he earned?

Sadly, no information reveals Jenkins' earnings and net worth. Also, with him yet to sign a contract with Chicago Bears, it is still unknown how much he will earn from the NFL team.

Who is Teven Jenkins' Girlfriend?

Teven Jenkins is in a very adorable romantic relationship with his beautiful girlfriend. His girlfriend's name is Sydney Springfield. The two first met each other while studying at Oklahoma State University. 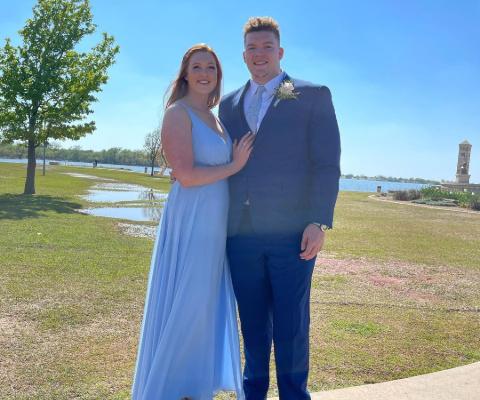 Much like Jenkins, his girlfriend is also interested in sports and is a softball player. As for their relationship, it officially began on November 18, 2019. Ever since then, the two have always been together and have always supported each other.

On November 18, 2020, the boyfriend-girlfriend duo celebrated their one-year dating anniversary. Other than that, the couple is usually seen celebrating each other's birthdays and other special occasions.