Tariq Castro-Fields is one of the emerging football cornerbacks who currently plays for the San Francisco 49ers. The turning point of his football career began with the 49ers when he got drafted in the sixth round of the 2022 NFL Draft by the San Francisco 49ers. Not to mention, he had an excellent high school and college career and impressed many people with his great performances.

Tariq Castro-Fields, a cornerback for the San Francisco 49ers, played for head coach Caesar Nettles at Riverdale Baptist. Castro-Fields served as team captain as a senior and played with former Nittany Lion teammate Zech McPhearson at Riverdale Baptist. Also, he helped the Crusaders to the 2013 Independent Athletics Conference Championship and an 11-0 record. He was selected first-team USA Today All-State as a senior.

Everything On His Family Life and Age

Castro-Fields was born as Tariq Quinton Castro-Fields on January 14, 1999, making his age 23 years as of 2022. Castro-Fields is a native of Alexandria, Virginia and spent most of his early days in Upper Marlboro, Maryland. The American guy looks pretty tall, and his height is measured at 6 feet (1.83 m). 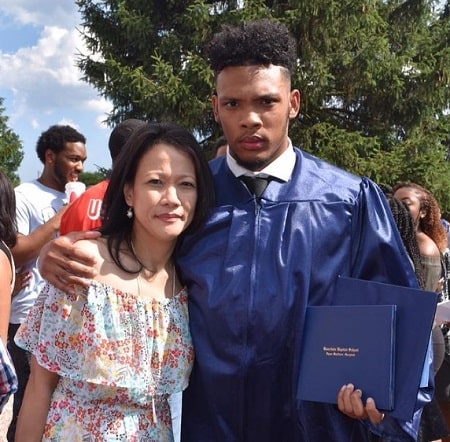 According to gopsusports, he is the son of Erlinda Castro. Castro-Fields shares a strong bond with his parents, but he does not want to talk much about his family background in the media. So, due to his very secretive nature, we cannot find much about his father and mother. Back in 2017, he shared a photo with his mother where we could see him together with his mom at the graduation ceremony.

Apart from that, Castro-Fields once talked about his grandmother. In that interview, Castro-Fields admitted that he is pretty close to his grandma, and she is his favorite person in the world as she has been with him in every step of his life and has supported him.

You May Read: Myjai Sanders

Moving onwards, Castro-Fields attended the Riverdale Baptist School. In his high school career, the 6 feet tall player was named Washington Post All-Met's first team in 2016. Also, he was selected DMVelite All-Maryland honorable mention in 2015. Castro-Fields participated in Nike's The Opening Regional, where he was named the top defensive back.

Furthermore, the 6 feet tall cornerback was tabbed a four-star recruit by 247Sports, Rivals and Scout and a three-star prospect from ESPN. He lettered in track & field for three years. Moreover, Castro-Fields had the fastest 4x400 time in the state of Maryland during the indoor season of his sophomore year. 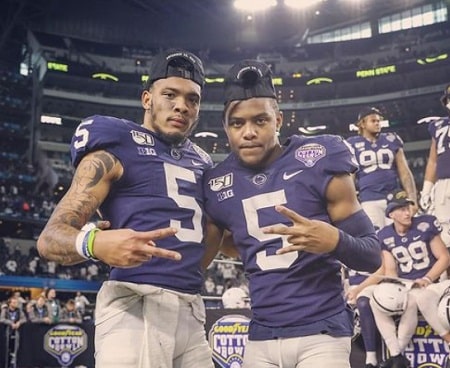 Later, Castro-Fields committed to play college football at Penn State after considering offers from Maryland and Alabama. He made his collegiate debut in the match against Akron. For your information, he played in 12 games as a freshman and finished the season with ten total tackles, three passes broken up, and one interception.

As a junior, Castro-Fields had 52 tackles and led the team with two interceptions, and eight passes were broken up. Moreover, Castro-Fields played in three games during Penn State's COVID-19-shortened 2020 season, missing the rest due to injury. He decided to use the extra year of eligibility given to college athletes who played in the 2020 season due to the COVID-19 and return to Penn State for the 5th season.

Moreover, his professional career started after getting drafted by the San Francisco 49ers in the sixth round of the 2022 NFL Draft. So, adding Castro-Fields to the 49ers roster gives them chasms and potentially someone who can be a supporter. And now, the team has a lot of developmental players at their removal to avoid all the negative situations.

The handsome hunk, Castro-Fields, takes home a good sum from his current team. According to a close source, the total value of the four-year contract is set to be $3,815,412, including a signing bonus of $155,412 and a 2022 salary-cap figure of $743,853. So, from this, we can say that his bank balance is pretty amazing, and his net worth can be speculated at six figures.

Having such a high salary, his net worth might be around $500,000 to $800,000. But due to the lack of information, we are unable to mention much about his net worth. Meanwhile, his major source of income comes from his professional football career. And he has previously participated in various games that must have boosted his income. 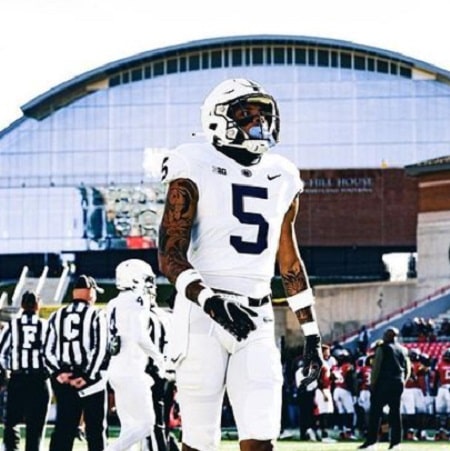 Like many other athletes, Castro-Fields may take home a fruitful sum from endorsement and sponsorship deals. Currently, he has gained over 13k followers, and his estimated earnings from a single sponsored post on Instagram are around $93 - $155.

Take A Look At His Love Life - His Social Media Presence

When it comes to the topic of his love life, Castro-Fields prefers to keep it away from the limelight. Till now, the 23-years-old cornerback has not given any hints about him being involved in romantic affairs. From this, it can be said that he has been leading a single life for a long time. Also, he is focusing more on his career to make it look marvelous.

No doubt, Castro-Fields will get a loving partner in the future, and he may surely give some updates about his girlfriend or wife from his Instagram account as his fans have been eager to know about it for a long time. So, if you want to get more updates, follow him under the username @poundfive. Besides that, he also has a strong presence on Twitter where he is available as @TCF5_. Apart from that, he is a family man, and he spends time with his family during his spare time. As mentioned earlier, he has shared a photo with his mother.