"A mother's love doesn't make her son more dependent and timid; it actually makes him stronger and more independent." With this beautiful line today our topic is about one of the NBA's strongest Mother-son duo. Who does not know Portland Trail Blazers shooting guard, Anfernee Simons? But do you have any idea of the gem behind Simons to reach this spot today? Well, the answer is Simons' mom, Tameka Simons.

Read this full article to know about Tameka Simons. SCROLL DOWN!!

On 8th June 1999, Tameka and her husband, Charles welcomed their first kid, a son, Anfernee Simons, named after NBA superstar Anfernee "Penny" Hardaway, since they are fans of the Orlando Magic. Besides, they have other two children. 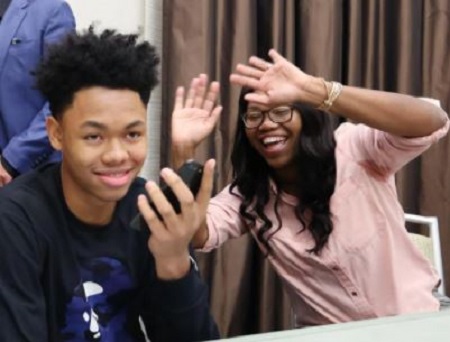 It was around Anfernee's five when Charles notice his kid had a special talent. He would constantly make him do stuff over again, was really nitpicky for Anfernee who just wanted to hoop. For Charles, success rested in the details: it was about repetition, playing fundamentally sound and the right way no matter how old you are.

But, of course, that's not easy for 5, 6 years old. So, Tameka took a role of a mediator, measuring her son's mood and mental stability with his father's instruction, providing a needed "balance." She said, along the way, there were plenty of battles and tears. As Anfernee got older, he understood the little pickiness and why his dad was like that.

Simons graduated from Edgewater High School in 2017 after transferring from Montverde Academy, where he starred as a junior. From Edgewater, he attended IMG Academy and represented the US on the Men's National Under-19 team. After originally committing to play college ball at Louisville, Simons reopened his recruiting period after a coaching change and later declared for the Draft immediately after his post-graduate year at IMG.

In the time of the draft, Charles said, "Me and my wife, we usually go to bed early. We haven't been going to bed early since the draft because we don't want to wake up and realize this is just a dream. It's definitely a great feeling. We're just so happy for him and happy that the hard work did pay off."

When Anfernee was named No. 24 NBA Draft pick by Portland, mother, Tameka, and Anfernee froze in the middle of the mayhem and hugged. Simons is the first American-born player to go directly from high school to the NBA since the league changed its draft rules in 2005.

What's On Her Socials?

Rather than her own pictures, Tameka Simons' socials such as IG and Twitter are full of Anfernee Simons NBA's posts. Tameka is very supportive of her son in every way.