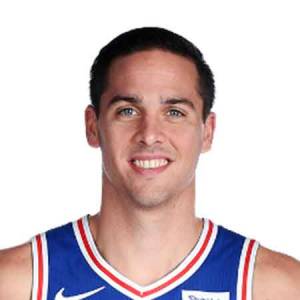 T.J. McConnell is an American professional Basketball Player player who plays in the National Basketball Association (NBA). McConnell was signed by the Philadelphia 76ers as an undrafted agent in 2015 and currently plays as their point guard.

McConnell has an estimated net worth of over $1.5 million.  His salary for the 2018-19 season at the 76ers is $1,600,520. In September last year, McConnell got married to his girlfriend Valerie Guiliani.

Timothy John McConnell Jr. was born on March 25, 1992, in Pittsburgh, Pennsylvania to parents Tim McConnell and Shelly McConnell. He grew up along with his brother Matty McConnell.

McConnell Jr. attended Chartiers Valley High School in Bridgeville, Pennsylvania where he played for his high school basketball team. He averaged 34.2 points, 8.2 rebounds and 9.1 assists per game in his senior season.

After completing high school, Timothy John McConnell Jr. enrolled at Duquesne University and played two seasons with the team before transferring to Arizona State University where played for the Arizona Wildcats.

T.J. McConnell was undrafted in the 2015 NBA draft but was signed by the Philadelphia 76ers as an undrafted agent on September 27, 2015. A fairly well performance averaging 6.2 points and 4.8 assists in five games led him to make his NBA debut in the team's season opener against the Boston Celtics.

Aside from T.J. McConnell, the current roster of the 76ers include players like Joel Embiid, Jimmy Butler, J. J. Redick, Ben Simmons, and Markelle Fultz.

T.J. McConnell married his longtime girlfriend Valerie Guiliani in September 2017. The two have been together since their high school years and it was a long time coming. Nik Stauskas who is McConnell's teammate also served as one of the groomsmen.

It has been one year into their marriage and the couple has not shown any signs of a child being on the way. When McConnell is not busy playing basketball, he is happy to spend his time with his wife which can be seen from the various pictures that he uploads on his Instagram page.

Over more than 3 seasons of his time in professional play, he has made $2,871,111 in career earning. His salary for the current season will be $1,600,520. Though there has not been any talk of it yet, he may get better offers before the end of the season which can increase his net worth in the future seasons.