Szymon Zurkowski is a well-known footballer hailing from Poland who currently plays for the team of Serie A club Empoli. The young player came into Empoli on loan from Fiorentina. His main position is a midfielder, and he currently wears jersey number 27. Furthermore, Zurkowski is considered one of the most skilled players in his team as he has helpt them to give the best performances in various matches.

The professional football player, Zurkowski mainly plays as a midfielder, but he sometimes plays as a classic winger. Furthermore, he is very young and has been able to gain fame with his amazing performances. He was interested in playing football from a very young age, and he aimed to pursue a career in it. So, it's been many years since his involvement in this field.

Details On His Age and Early Life

Szymon Zurkowski was born on September 25, 1997, in Tychy, Silesia, Poland. So, as of early 2022, he is 24 years old, and he will turn 25 on September 25. Zurkowski is very private when it comes to the topic of his family life, so he has not shared anything about his family members. Due to this reason, his parents' identity remains unknown.

Not to mention, he holds Polish nationality. Talking about his physical appearance, Zurkowski looks pretty tall, and his height is measured at 6 feet 1 inch (1.85m). And he weighs around 71 kg.

Everything On Zurkowski's Professional Career 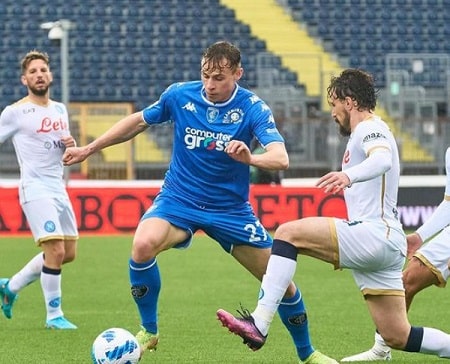 Szymon Zurkowski in one of his matches
SOURCE: Instagram @szymonzurkowski

Furthermore, Zurkowski made headlines on national media after signing a contract with Fiorentina. It was said that he got signed on January 28, 2019, and it was until June 30, 2023. In addition, Zurkowski stayed with Gornik Zabrze on loan for the remainder of the 2018-19 season.

And he went to the team of Empoli on loan on January 30, 2020. Likewise, on September 1, 2020, Zurkowski returned on loan to Empoli until June 30, 2021. So, he is now playing for Empoli and is doing well in his career. Besides his career in various clubs, he has also represented the national teams at various levels.

He played five of the Polish U21's six group games, scoring one goal during the 2019 UEFA European Under-21 Championship qualification from September 2017 to March 2018. Apart from the under-21 levels, Zurkowski has also played on the senior team. For your information, he was named in the 35-man provisional squad for Poland for the 2018 FIFA World Cup. Unfortunately, he was not included in the 23-man squad.

And his debut for the national team came on March 24, 2022, in a friendly match as a starter versus Scotland.

The professional footballer makes most of his gains from his profession as a football player. He is currently playing for Empoli as he came on a loan from Fiorentina. But the current salary is not available in the public domain as Zurkowski has also not shared anything with the tabloids. 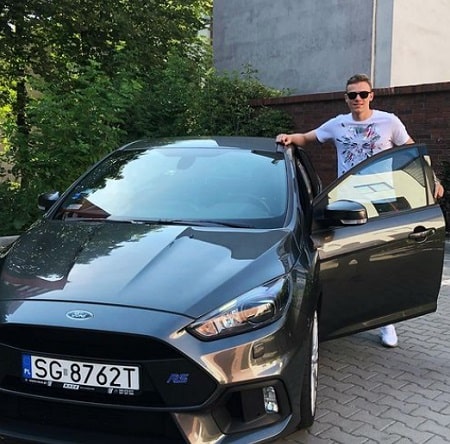 Meanwhile, he also played for Fiorentina, and during his time, he earned around £13,000 per week, and £676,000 per year, as reported by Salary Sport. The same report has mentioned that his net worth is around £2,809,040. Likewise, Transfer Market reports that his current transfer value is €7.00m. Further, Zurkowski's transfer was from Fiorentina to Empoli in 2020.

In addition to that, Zurkowski may earn around $156 - $260 from a single sponsored post on Instagram, as per the Influencer Marketing Hub. The professional player has worked with some brands that must have helped him preserve a decent fortune.

As said earlier, Zurkowski is very secretive when it comes to his personal life, but he has made some posts with a girl who appears to be his girlfriend. From this, it can be clear that he is in a relationship with his loving girlfriend. However, Zurkowski has not shared her name openly. Also, it is unknown when they began dating each other.

He shared a photo with his lover on December 25, 2020, and it was on the occasion of Christmas. In the comment section, his fans and well-wishers left beautiful and cute messages to them. Despite sharing the photo, Zurkowski did not tag his girlfriend on that post. Since then, he has not made a single post regarding his love life. So, we can say that the experienced midfielder keeps his personal details away from the media and wants to live a low-key life.

Like many other athletes, Zurkowski is also an active user of Instagram, where we can find him under the username @szymonzurkowski. His account has already been verified from where he makes posts regarding his lifestyle and games.

Moreover, he has also shared various images of different cars. His IG account has been followed by more than 24.1k people, and he has also followed around 400 people. His first post was made on December 6, 2014. So, it can be said that the 6 feet 1-inch tall footballer has been using this platform since 2013. Besides that, Zurkowski is not active on other social media platforms.