Sven Bärtschi is a Swiss professional ice hockey player who plays in the National Hockey League (NHL). As of 2019, Sven Bärtschi currently plays for the Vancouver Canucks as their Left Wing. Sven Bärtschi has played for other teams like SC Langenthal, Calgary Flames.

As a Left Wing, Sven Bärtschi reportedly earns around $3,367,000 as his yearly salary from Vancouver Canucks. Further, Sven Bärtschi has an estimated net worth of over $10 million.

Sven Bärtschi was born on 5 October 1992, in Bern, Switzerland to parents Hans-Rudolf Bärtschi and Daniela Bartschi. In addition to this, his father also played ice hockey in the National League A and Sven's parents divorced in his early age of 11.

As per his nationality, he is Swiss and belongs to the White ethnic group and his star sign is Libra.

As of 2019, Sven Bärtschi has an estimated net worth of over $10 million which is same as that of Blackhawks player Jeremy Colliton. The list of highest earners of the Canucks team includes Loui Eriksson, who is earning an annual average salary of around $6,000,000.

Sven is married to his lovely and gorgeous girlfriend Laura in July 2018 at the Oregon Golf Club in Portland in front of family and friends including Sam Gagner in a lavish wedding ceremony. The couple got married after being in an affair for a long time.

So far Sven is living a happy married life with his wife/spouse since there aren't any rumors regarding their divorce or splitting. Moreover, Sven hasn't shared about his past relationship or affair on media.

Other than being a famous NHL Left Wing, Sven Bärtschi is pretty famous in social media. The Famous NHL star is 5 feet 11 inch in height and weighs around 87 kilograms. Sven Bärtschi is not only a world-class athlete but also has a very attractive individual.

Sven started his professional NHL career after being drafted in the 2011 NHL Entry Draft by the Calgary Flames in the 13th overall pick and made his NHL debut in 2012. 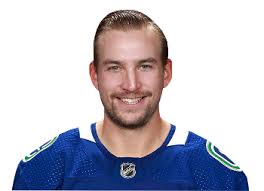 After playing for four seasons with the Flames, he was traded to the Vancouver Canucks on 2 March 2015. Currently, he is playing alongside famous defenceman of the Canucks Luke Schenn.