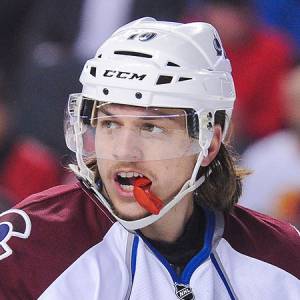 Sven Andrighetto reportedly earns around $1,400,000 as his yearly salary from Colorado Avalanche and has an estimated net worth of over $2 million. As per recent reports, he is currently in a romantic relationship with his girlfriend, Bailey Cook.

Sven Andrighetto Net Worth and Salary

Additionally, Sven Andrighetto so far has made earnings of $4,052,724 from his entire NHL career.

According to the reports, Sven Andrighetto is in a romantic relationship with his girlfriend  Bailey Cook. The couple reportedly is dating each other since late 2018.

His girlfriend Bailey is a biology student.

Despite a busy schedule, Sven Andrighetto spends quality time with his girlfriend and his family. Sven Andrighetto post very adorable picture of them in different social media. They create a lot of buzzes posting their pictures as they both are very good looking.

In addition, he was in a relationship with the girl named Kay de Courval which didn't last for long. His former girlfriend is a model based in Toronto and has done photo shoots for magazines like The Hockey News and Playboy.

There are also reports that he was rumored to be dating a Swedish model whose identity is not disclosed yet. After his affair with Bailey started, he talked about his past affair and said:

"After separating from my Swedish girlfriend in August, I did not really want to make a new relationship for a long time. But then we met at the season opener of the Denver Broncos, and I instantly fell in love with Bailey."

Additionally, Sven Andrighetto also spends quality time with his family. Although the names about his parents and his siblings are not revealed, he keeps on posting pictures of them in social media. Talking about his physique, the Famous NHL star is 5 ft 9 in height and weighs around 82 kg

Sven Andrighetto was born on 21 March 1993, in Sumiswald, Switzerland. The information about his parents is not revealed in the media yet. As per his nationality, he is Swiss and belongs to the white ethnic group. Further, his star sign is Aries.

Prior to his professional career, Andrighetto played with a Zürich youth team at the 2006 Quebec International Pee-Wee Hockey Tournament.

Andrighetto entered his final year of eligibility for the 2013 NHL Entry Draft; when the draft came, he was 20 years old, held in Newark, New Jersey. The Canadiens signed a three-year entry-level contract on July 15, 2013, detailing a two-way deal worth $625,000 if Andrighetto played in the NHL and $ 70,000 if he played in the American Hockey League (AHL). The contract included a signing bonus of $75,000.

Andrighetto was traded by the Canadiens on March 1, 2017, at the Colorado Avalanche in exchange for Andreas Martinsen, fighting to secure a defined role in the team and has contributed only 8 points in 27 games.

He scored his first goal for the Avalanche on March 11, 2017, in a loss against Ottawa Senators. Because of an extended opportunity in a scoring role on a line with Nathan MacKinnon and Mikko Rantanen, Andrighetto flourished to lead the Avalanche in scoring through March and completing the season with 16 points in 19 games.

Currently, he is playing under the guidance of manager, Jared Bednar, playing along with his star teammates such as Gabriel Bourque, Nathan MacKinnon and many more.