Gabriel Landeskog is a Swedish professional ice hockey player who plays as well as serves as the captain of the Colorado Avalanche of the National Hockey League (NHL). The twenty-six years old ice hockey forward was picked 2nd overall in the 2011 NHL draft by Colorado. Prior to that, he played for Djurgårdens.

Named the youngest captain in NHL history at 19 years and 268 days, Landeskog currently has an estimated net worth of $16 million. Neither single nor married, he is in a relationship with his long-term girlfriend, Mel Shouldice.

Gabriel Landeskog Salary and Net Worth

As of 2019, Gabriel Landeskog has an estimated net worth over $16 million, mostly earned through his ice hockey career. Currently, he is under 7 years contract worth $39,000,000 with the Colorado Avalanche, signed back in 2014.

Apart, he has a fashion line for his fans that makes t-shirts, Jerseys, and gears as well of Gabriel Landeskog.

Mel Shouldice is the hot WAGs belonging to NHL star Gabriel Landeskog. According to the source, the pair started dating since 2012. However, they have not mentioned when and where they met initially or who approached first. 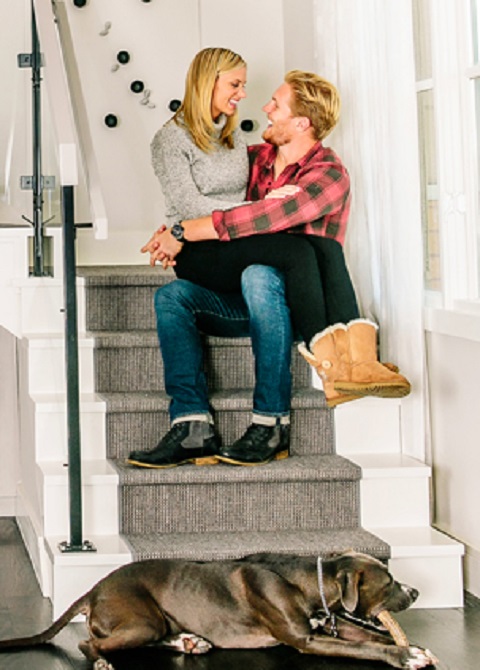 More about Mel Shouldice: she is a proud graduate of the University of Guelph and originally hailed from Toronto, Canada. An avid dog lover, she and boyfriend, Landeskog own a dog named Zoey.

Not to mention, Landeskog and his wife-to-be prefer a low key personal life. They rarely share lovey-dovey pictures of them.

Besides, Landeskog was previously in a relationship with a girl named, Rachel.

Gabriel Landeskog was born on November 23 in 1992 in the city of Sweden in Stockholm. His star sign is Sagittarius. Further, he holds a Swedish nationality, however, his ethnicity is under review.

He is the son of Tony Landeskog, former Swedish Hockey League defenceman who currently works in the insurance business whereas his mother, Cecelia, is a chef and cooking instructor. Moreover, he has an older brother Adam Landeskog as well as a twin sister named Beatrice.

Gabriel Landeskog was a star junior in his homeland and he became one of the youngest players ever to compete in the Swedish elite league when he suited up as a 16-year-old for DJurgardens IF in 2009.

Landeskog made his North American Debut In the Ontario Hockey League for the Kitchener Rangers during the 2009-10 season and immediately impressed October finishing the year third OHL rookie score October 24, 2010.

Landeskog was named the captain of the Kitchener Rangers the 2009-10 season and immediately impressed, finishing the year third among OHL rookie scorers.

On October 24, 2010, Landeskog was named the captain of the Kitchener Rangers, the first European captain in franchise history. Landeskog made the jump directly from the junior ranks to the bright lights of the NHL for the 2011-12 season and would excel in his first professional campaign.

Landeskog led the Avalanche with 22 Goals and tied with Ryan Nugent-Hopkins in the league top rookie scorer.

What an AMAZING and busy busy season we've started off too! #penguinsvsavs #1-0

On September 4, 2012, Landeskog was named the captain of the Colorado Avalanche. At just 19 years 286 days, he surpassed Sidney Crosby as the youngest captain in NHL history.