Super Bowl champion (LII), Steven Means is an American football defensive end who is currently signed to the Atlanta Falcons of the National Football League (NFL). He finished his collegiate career at the University at Buffalo and was drafted by the Tampa Bay Buccaneers in the fifth round of the 2013 NFL Draft. Also, he played for Baltimore Ravens (2014−2015), Houston Texans (2015), and Philadelphia Eagles (2015–2017).

Buffalo, New York native, Steven Means was born on 16th September 1990, under the star sign Virgo. As per nationality, he is an American and is of Aro-American ethnic background. Regarding his physique, the thirty-year-old stands 6 ft 3 in (1.91 m) tall and weighs 263 lb (119 kg).

Turned pro in 2013, Steven has played in 8 seasons so far with various NFL teams earning a tremendous sum of money. His NFL Career Earnings are listed below the table.

Steven Means' Wife: Is He Married?

No. 55 – Atlanta Falcons defensive end is a married man and shares a son with his wife. Scrolling through his IG, Means often shares pictures with his wife and baby. But the thing is he prefers his love life low-key. He posts pictures with his wife, but with no tags to her. Even the media does not know her name. Unlike other wags, Mrs. Means stays out of the limelight. 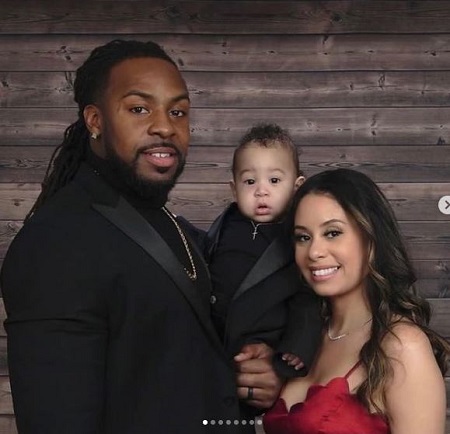 Means adores his wife very much on one of his IG posts, he wrote "Behind every good man is a greater woman!!! Facts..."

The following year, The Baltimore Ravens signed Means to their practice squad, however, an injury led him created a vacancy on the roster. On May 7, he accepted a $510,000 exclusive-rights tender offer from the Ravens but he was released by the Ravens with an injury settlement.

On 20th October 2015, he signed to the Houston yo their practice squad. later two months, he signed to Philadelphia's practice squad. The following year, he was on the active list played a few games roo. In 2017, he signed a one-year contract extension with the Eagles. That season, he won Super Bowl LII after the Eagles defeated the New England Patriots 41-33. On 1st September 2018, the Eagles released him. Later, 10 days, he was signed by the Atlanta Falcons.