Apeldoorn, Netherlands native, Steve Berghuis was born on 19th December 1991, under the star sign Sagittarius. His father, Frank Berghuis is a retired football player who played  Volendam, VVV-Venlo, and Cambuur among others as well as earning one cap for the Netherlands senior international team. Further, his brother, Tristan Berghuis is also a footballer.

How Much Is Steven Berghuis Net Worth In 2021? Salary & Market Value

Steven Berghuis is in a relationship with Nadine Bamberger for a long-time now. They came public for the first time in 2015 when the winger posted a picture of Nadine kissing him on his Instagram. In 2019, the couple welcomed their first child, a baby girl named Joy. 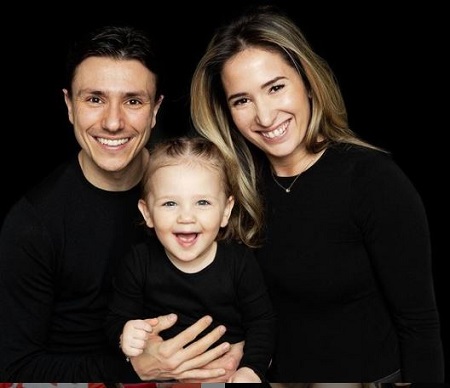 Steven's girlfriend, Nadine Bamberger, on the other hand, is a low-key person. There is not much information about her. Further, she has set her Instagram account private.

In January 2011, Berghuis was called up to the Twente Berghuis first team. On 19th January 2011, he made his first-team debut for Twente as a substitute in a 5–0 Eredivisie victory against Heracles.

On 23 June 2011, Berghuis scored his first goal for the Twente in a pre-season friendly against Eerste Klasse D team DOS '37. Also, he played in the club's 2011–12 UEFA Champions League qualifying legs against Romanian club Vaslui during which Twente won 2–0 on aggregate.

On 20 June 2012, he moved to AZ for a reported £400,000 transfer fee, signing a contract keeping him at AZ until 2017. On 23rd August, he made his AZ debut playing 16 minutes after coming on as a substitute in a 1–0 loss against Anzhi Makhachkala in the qualification round of the first leg of the 2012–13 UEFA Europa League.

The 2013–14 season was Berghuis's breakthrough season as he featured more in the starting 11.

On 27 July 2015, Berghuis signed to English Premier League club, Watford, where he made his debut on 15 August against West Bromwich Albion, coming on as a late substitute in a 0–0 draw.

Since 2016, Steve Berghuis is playing in the Netherland senior squad. On 27 March 2021, scored his first goal for his native nation, scoring the opening goal in a 2–0 victory over Latvia during the 2022 FIFA World Cup qualifiers.