Steve Birnbaum is one of the prominent American soccer players who currently plays for D.C United and he is also in the national United States National football team. He is quick and effective in the field. He is technically very proficient with the ball.

This professional player was born in the year 1991, on January 23 in  Newport, California, the United States. He is an American by his nationality. His ethnicity is Jewish. His mother's name is Peggy Birnbaum. He went to Northwood High School and completed high school there.

How much does Steve Birnbaum Earn in a Year?

The American defender earns a fortune amount of salary playing for the DC United. His annual wage with the club is reported to be $525,00 as base salary while he will be earning $550,000 including compensation while Wayne Rooney is the highest-paid player in the team with the annual salary of $3,500,000.

Steve Birnbaum is married to his girlfriend Jeanne Shewmaker. He married his wife at a Virginia winery on December 15, 2018. The couple first met on a blind date at a dive bar in Washington, D.C. in May 2015 and tied a knot after three years. 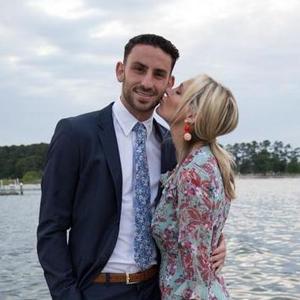 Steve praised his wife after the wedding and said:

“Jeanne is the most beautiful woman I have ever laid my eyes on. She is hilarious and her laugh always makes me smile. She is my complete opposite and brings me out of my shell. She is my best friend."

Steve and Jeanne became the parents of their first child, a daughter in October 2019.

He has a standing height of 6 feet and 2 inches. He has a perfect body weight.

Birnbaum initially played for the United States U18 and the United States U20 National teams in 2008. From 2009 to 2013, he was associated with the University of California and played football for five years. At that time in the year 2010 & 2011, he also made his appearance for USL PDL club Orange County Blue Star.

In the year 2012, this man also won a silver medal with the U.S team in the 2012 Pan American Maccabi Games in Brazil. He has been playing professionally in his intl. career, currently he plays as a defender for D.C. United.