Scottie Barnes is a rising American college basketball player. He has been playing in the Atlantic Coast Conference for the Florida State Seminoles. Scottie has been part of three gold medal-winning teams at FIBA Under -19 World Cup, FIBA Under-17 World Cup, and FIBA Americas U16 Championship.

Scottie Barnes was born Scott Wayne Barnes Jr. on August 1, 2001, in West Palm Beach, Florida. He is among the three children born to Kathlyn Wilkins and her husband. He has two brothers, Jon French and Shawn Barnes. Scottie was raised by his single mother and is yet to share his biological father with the public. After graduating from Montverde Academy, Barnes enrolled at Florida State University. Scottie stands six feet and nine inches tall and 103 kg (227 lb).

Florida Native Scottie started playing basketball with his siblings from a very early age. He played as a freshman for his School team at Cardinal Newman. He earned All-Area second team and MaxPreps Freshman All-American honors. At the end of the year, Barnes transferred to NSU University School and helped his team to a 36–2 record and its first-ever Class 5A state title.

In his Sophomore year, Barnes team won a City of Palms Classic Championship, and he was named the tournament's most valuable player with 15 points and eight rebounds in his final game. For his senior year, Scottie transferred to Montverde Academy. Many analysts regarded his team as one of the greatest in high school basketball history. Barnes was selected to play for several events like the McDonald's All-American Game, Jordan Brand Classic, and Nike Hoop Summit.

Scottie was a consensus five-star recruit for his University. Several top analysts ranked him the fourth-best player in the 2020 recruiting class. Numerous top universities like Kentucky, Miami, Oregon, Florida approached him with scholarships, but he committed himself to the Florida State University. At the end of his freshman year, Barnes got selected in Mc Donald's All-American team and was named ACC freshman of the year. 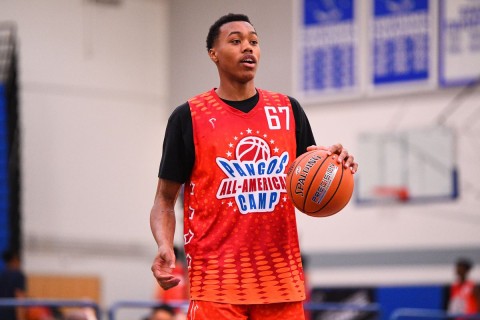 Scottie has been playing for his University team SOURCE: A Sea of Blue

Scottie has already made an appearance with the national team. He has been part of the National team since the 2017 FIBA Under-16 Americas championship, where they won a gold medal. The following year, Barnes won the gold medal in FIBA under-17 World Cup.

Scottie seems to be living a single happy life. He is very much early in his career and must be focusing on his career rather than spending time with new peoples. Barnes keeps updating his 157k followers in his Instagram account regularly. Scottie's relationship status is a mystery to his fans. He could secretly be dating someone or could be single.

Barnes is currently playing for his college team, and as per the NCAA rules, No player can receive money for the game. He is ranked among the highest college basketball player and is expected to list his name for the 2023 NBA draft list.