Santiago Vescovi is a college basketball player from Uruguay who currently plays in Southeastern Conference(SEC). He plays in the Point guard position for the Tennessee Volunteers. He was considered a three-star recruit by ESPN and Rivals while 247Sports also ranked him as a four-star circuit.

The Tennessee Volunteers point guard has also represented both the Uruguayan junior national team and senior national team. He played for the junior team in FIBA South America U-15 Championship and recorded averaged 21.8 points, six rebounds, and 3.4 assists per game in 2016. Besides, he also made his debut for the senior team at the 2019 Pan America Games.

Santiago Vescovi was born on September 14, 2001, in Montevideo, Uruguay. He is the son of his father, Pablo Vescovi who played volleyball for Atletico Bohemios. His mother's name is Laura Vannet. His grandfather used to play basketball for the Uruguayan national team and Bohemios.

Having Italian descent, Santiago was raised along with his sister Lucia in Uruguay and later brought to America. In his early days, he played for Club Atletico Bohemios. Later he attended  NBA Academy Latin America after receiving an invitation from them. In 2019 he transferred to NBA Global Academy in Australia where he led the team to the NBA Academy Games championship. In 2019, he committed to the University of Tennessee.

As of 2021, Vescovi is just 20  years old who possesses a height of 6 feet 3 inches. He has an average weight of 87 kg with slightly grey and black hair. 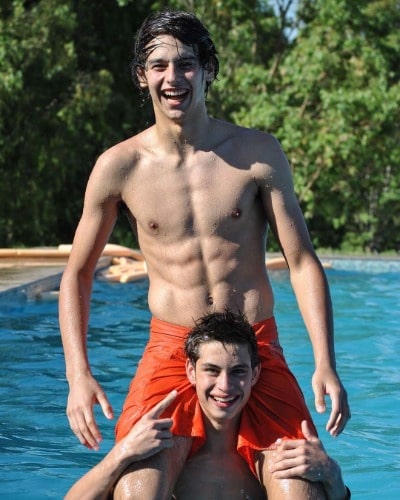 He is Uruguayan by nationality and white ethnicity.

As of 2021,  Santiago Vescovi's net worth is estimated to be around $100,000 approximately. Though he has never talked about his net worth, there are no official statements regarding his market value. However, we can guess, the teenager's monetary worth is more than an average 20-year-old.

Read about:- Trent Frazier’s Contract and Salary; How much is his Net worth? Playing for such a competitive league at such a young means he has a great year ahead of him along with sponsors and brands.

Read about:- Williams Contract and Salary; How much is his Net worth?

Santiago Vescovi is quite secretive about his girlfriend and dating life. He has never appeared together with any other woman in the public. Also, he has never shared photos with any girls, not even a glimpse of his love life.

The young Uruguayan basketball player is an active social media user, and following his timelines, it seems like Santiago is single as of 2021. His timeline is filled with photos of his games, training, family, and friends.

He frequently shows his love and affection towards his family and friends through his social media.