Sandro Tonali is a professional football player from Italy. He plays the role of a center midfielder for Seria A  club Brescia Calcio and for the national football team of Italy. For the first time, he was called in Italy National team in 2018 by manager Roberto Mancini.

Sandro was born on 8 May 2000 in Lodi Italy. He is known all over the world through the great performance that he has shown from his club and from his country. He is uplifting his career through his talent and by giving a great effort, performance in the matches.

How much Net Worth does Sandro have in 2020?

In 2020 Sandro Net Worth was estimated as ninety-eight million dollars. His current market value is thirty million euros. He is incremented his marketing value by showing his capacity in football. He is fully engaged in football so football is the main source of income of Sandro Tonali. In Brescia Calcio, Mario Balotelli earns a huge amount of money compared to other players his weekly wages are €37,000 while Sandro earns weekly €9,000 till the date.

Tonali is thought to be valued at around fifty million euros but Brescia president Massimo Cellino has claimed he is actually worth six-time that amount. He has a great talent. therefore due to his talent, many big clubs are interested in him like Manchester City Paris saint-German and so on.

The combined form of Andrea Pirlo And Gennaro Gattuso

Sandro Tonali has described himself as a mixed form of Andrea Pirlo and Gennaro Gattuso after he debuts his or after he was called by Italy National Team. Sandro Tonali came on as a 74th-minute substitute in his country game against Liechtenstein. He has won his debut match with 5-0. Tonali is just nineteen years old but he is compared with the greatest time midfielder Pirlo. 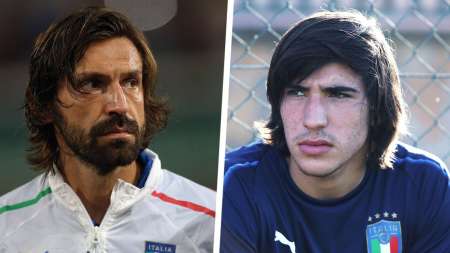 According to Sandro Tonali, he has copied the playing style of famous player Gattuso and Pirlo. After winning his debut match he says he is the mixed form of Pirlo and Gattuso. Sandro feels happy while other players, coach compared his with two legends of Italy who have given great contribution fro their club as well as for their Nation. Among two legends Gattuso is the idol if Sandro. Moreover, he tries to follow the way of Gattuso.

Sandro Tonali made his professional debut in football for Brescia Calcio on 26 August 2017. He started his debut match coming on as a substitute in the Serie B against Avellino. On 28 April 2018, he scored his first professional career goal against Salernitana in Serie B. Later Tonali made his Serie A debut on 25 August 2019 at the age-aged 19 against Cagliari. He scored his first Serie A goal on 26 October, netting a superb long-range free-kick into the top corner from the left flank.

For the first time, Sandro took the part from his country (Italy) in 2018 in UEFA European Under-19 Championship, reaching the final of the tournament lost 4–3 after extra-time against Portugal. In November 2018, Sandro Tonali was called by the senior national team manager Roberto Mancini. He made his debut with the Italy U21 against Austria in Trieste on 21 March 2019. He made his senior international debut on 15 October, coming on as a substitute in the 5–0 away win against Liechtenstein in Vaduz. His first start for Italy came in his following appearance on 15 November, a 3–0 away win over Bosnia and Herzegovina.