Samuel Kuffour was born Samuel Osei Kaffour on September 3, 1976, in Kumasi, Ghana. He is the son of Gloria Abena Atea and her husband. Much about his early life and parent is under the radar. Kuffour stands five feet and ten inches tall and weighs 70 kg.

Samuel Kuffour has an estimated net worth of more than $2 Million. A football player makes numerous income sources, including sponsorship and advertising deals. Kuffour played with one of the world's biggest clubs, Bayern Munich, for more than ten years. He was one of the club's prominent players and earned a lucrative sum from his career. 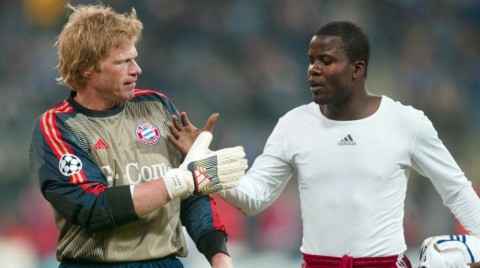 Samuel has not shared a word about his economic career and stats with the public. His former teammate at Munich, Oliver Kahn, has an estimated net worth of more than $10 Million. Kuffour is living a lavish lifestyle through his successful career. He became rich as a footballer, and he has several properties at home and abroad and lived his life during his playing days.

Kuffour is a married man living a happy married life and his wife and their children. Samuel walked down his wedding aisle along with Francisca Kuffour in the early 2000s. They had a beautiful and lavish wedding ceremony in front of their parents and close friends.

We believe that Kuffour has numerous children from different mothers following information available online. He has not shared exact information with the public. Also, Samuel doesn't show much presence on social media. In 2003, The player was devastated by the death of his fifteen months daughter from drowning in his hometown, ghana.

Samuel started playing football with a local youth club in his early teens. He was scouted by Torino FC in 1991 and brought to Europe. Kuffour moved to Bayern Munich and made his debut for the Bundesliga giants in 1993. The player had a decent start and was loaned to FC Nurnberg in the 1995/16 season.

Samuel spent a total of eleven seasons with the club. He became a prominent first-squad member who lifted the UEFA Champions League with the club. The player played an important role in helping win the 2000/1 Champions League title. After twelve seasons in Munich and 175 games appearance, Samuel left the club in 2005. He signed a three-year deal-free contract with AS Rome. He was loaned to Livorno for a season.

In late 2008, Samuel was rumored to transfer to Premier League Sunderland, but the rumor was never real. In 2009, He moved back to his home country and signed with Asante Kotoko but retired in late 2009 without playing an official match for Asante Kotoko.