Sam Mills was a well-known American football player. Sam played in the National Football League for twelve seasons. He was part of the Pro Bowl team five times from 1987 until 1996. Mills also worked as the coach for the Carolina Panthers from 1998 until 2004.

Sam Mills passed away, leaving his family and friends on April 18, 2005. He fought intestinal cancer for more than two years before losing the fight. Mills got diagnosed with cancer in August 2003 and underwent chemotherapy and radiation, and continued to coach. 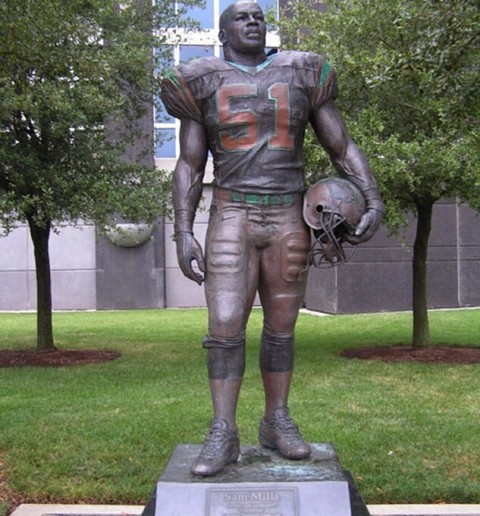 In the 2005 NFL season, Panthers retired Sam's Jersey no. 51, making it the franchise's first number. He was inducted into the College Football Hall of Fame.

Sam was undrafted in the 1981 NFL draft and signed with the Toronto Argonauts in the Candian Football league for a season in 1982. He spent his next three seasons with the team and then moved to New Orleans Saints in the NFL. He became a starter for the team and earned four Pro Bowl appearances with the Saints in 1987, 1988, 1991, and 1992. Mora, who coached 15 seasons in the NFL, called Mills "The best player I ever coached." Sam's contract expired in 1995, and Carolina Panthers successfully signed him and made his fifth super bowl appearance at the age of thirty-seven. He retired in the 1996 season and joined took a break from football for three years. In 1998, the Panthers hired him as their new defensive coaching assistant.

The following season, Panther promoted him as their linebackers coach. Although He was diagnosed with intestinal cancer in 2003, Mills continued to train and coach the team until his death.

Sam was married to his longtime girlfriend, Melanie Mills. The duo walked down their wedding aisle in the mid-1970s. The love birds welcomed their first child, Sam Mills III, in May 1978. Their son has been working as the defensive line coach for the Washington Football Team of the National Football League. Melanie and Mills III accepted the College Football Hall of Fame award in 2009.

Sam Mills had an estimated net worth of more than $2 Million. He earned most of his net worth through his career in the NFL as a player and a coach. The average salary of an NFL coach is more than $5 Million on average, and the highest-earning Bill Belichick has a salary of $12.5 with the New England Patriots.