If you love watching golf then, Sam Alexis Woods must not be a new name. Sam is the daughter of famous American professional golf player Tiger Woods. Alexis is very much early in her life to start her career. Woods was born with a silver spoon in her mouth.

Sam Alexis Woods was born on June 18, 2007, in the United States. She is among the two children born to Tiger Woods and his former wife, Elin Nordegren. Her father is a golf player, and her mother is a former model and also a nanny. Sam has a younger brother named Charlie Axel. Woods is in middle school.

Sam's parents started dating each other in early 2003. Tiger and Elin got engaged in November 2003. They met each other in 2011 at The Open Championship. After being engaged for some time, The duo walked down their wedding aisle on October 5, 2004, at the Sandy Lane Resort in Barbados. They had a private wedding ceremony with members from both the families and some close friends. 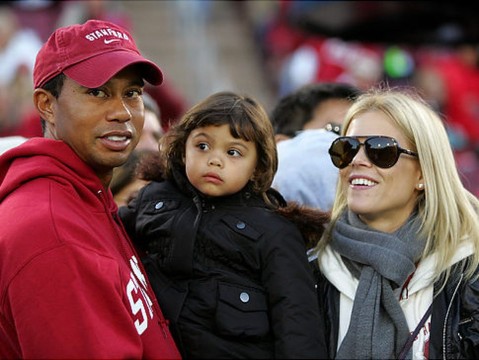 Sam along with her parents at en event SOURCE: US Magazine

In early 2007, Tiger shared about expecting their first child. In June, They were blessed with a daughter, Sam. In 2009, The family of three extended to four with the birth of Charlie Axel Woods. This happy-looking marriage never remained the same after the birth of children. They eventually got separated and moved on in late 2009. Tiger was rumored to have an extra-marital affair with nightclub manager Rachel Uchitel.

After separating from Tiger, Elin started living a single happy life until she found love with Chris Cline. This relationship ended shortly, and in mid-2019, She opened about expecting a baby with NFL Player Jordan Cameron. In October 2019, They were blessed with a son. On the other hand, Woods opened about his relationship with Lindsey Vonn in 2013. They split up in May 2015. Sam attends a function at the White House with her family SOURCE: Getty Images

Rumors of Tiger dating Kristin Smith surfaced in the market in late 2016. None of them ever said anything about the rumors. Since 2017, He has been dating Erica Herman.

Net Worth, Earnings and Income

Sam Alexis is yet to start her professional career. She is enjoying a lavish lifestyle through her father's successful career. Tiger Woods is the most successful golf player to date. He is the highest-earning golf player of the generation. Woods has an estimated net worth of more than $800 Million. In 2020, Statistics showed him to be the first billionaire from golf.

In 2021, He is ranked at No.12 in the highest-earnings athletes topped by Ronaldo. Sam earned $60 Million from his endorsement and sponsorship and just $200,000 as his salary. His massive endorsement deals have helped make him one of the richest athletes ever as he approaches a three-comma net worth.

Sam currently lives with her father and her sibling in the Multimillion-Dollar Mansions. As per sources, Tiger owns a private island in Sweden, a private resort in the Bahamas, and a restaurant in Flordia. In 2009, Woods bought a whopping $54.5 Million Mansion in Jupiter Island.