Ryan Daniel Silverfield is an American football coach currently serving as the head football coach at the University of Memphis. He spent most of his coaching career, which started during his senior year of high school as a line coach or a member of the offensive staff.

Born on 4th August 1980, Ryan Silverfield is forty-nine years old. His birth sign is Leo. He holds an American nationality and is of white ethnic background.

How Much Is Ryan Silverfield's Net Worth In 2021? Contract Details

Ryan Silverfield is under a five-year, $9.25 million contract with the University of Memphis. As per the deal, the head coach will receive a base salary compensation of $200,000 per contract year and will earn $1.75 million in total compensation during the first season of his deal. Moreover, the sum increases by $50,000 each subsequent year of the deal.

The contract further says If Silverfield were to quit Memphis for another job within the first three seasons of the deal, he would owe the university $1.5 million. Whereas, If Memphis fires Silverfield before the end of the contract, it would owe him 60% of what's due over the remainder of the contract at the time of his termination.

Along with that, the head coach is benefited to receive up to $500,000 in performance incentives.

As of 2021, Ryan Silverfield's net worth is estimated at $3 million.

Ryan Silverfield is married to Mariana for a long time now. Don't know about their children but they are parenting a four-leg baby, Max.

Matter of fact, Mr. and Mrs. Silverfield has always lived their love life lowkey. They enjoy their personal life behind the camera.

Ryan Sliverfield enrolled at The Bolles School where he played for years, winning state championships in 1995 and 1998. Then, he enrolled himself in coaching staff as an assistant for the 1999 season, ending his playing career. Hence, he is notable as one of the only coaches in the FBS ranks to have never played college football.

Silverfield started off his coaching journey during his freshman year at Hampden–Sydney College. There he opted to coach for his four years in college rather than play. During his first season there, he served as an offensive assistant and then as the defensive line coach for his sophomore and junior years, and as the tight ends coach for his senior year.

In 2004, he joined Memorial Day high school as their head coach.

In 2005, he served as the quarterback's coach at Jacksonville University as quarterback coach and then the following years at UCF as a graduate assistant (2006-2007).

From 2008-2013, he remained for six years in various positions at Minnesota Vikings. Then he had a season at Toledo. 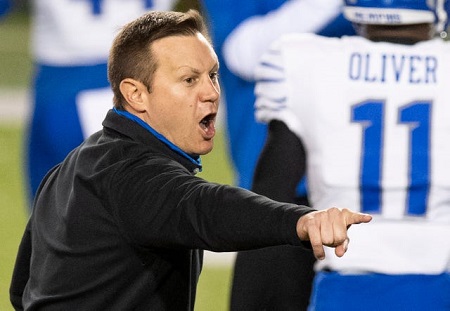 In 2016, Ryan was hired at Memphis as an assistant where he remained in that position for two years before being tapped as the offensive line coach and run game coordinator in 2018. By 2019, he was elevated to assistant head coach and was named interim head coach. On 13th December 2020, he was promoted to head coach.