Ryan Christie is a Scottish professional footballer who plays as a midfielder for one of his birth nation's teams, Celtic of the Scottish Premiership, and represents the Scotland National Football Team at the international level. He was a member of the Celtic team that won the back-to-back domestic treble (Scottish Premiership, Scottish League Cup, and Scottish Cup) in 2018-19 and 2019-20. He was also named Scottish Football Writers' Association Young Player of the Year (2014-15).

Christie was born in Inverness, Scotland on February 22, 1995. The son of Charlie Christie began his career with Inverness-based club, Caledonian Thistle before joining Celtic in 2015. He has represented the national football squad 20 times scoring 4 goals across all competitions, active since 2017.

Christie signed his first professional contract with Thistle in 2011 making his Scottish Premiership debut against Celtic on December 29, 2013. In 2014-15, while still a player for Thistle, Christie won SPFL Young Player of the Month for August. That season, he won yet another Young Player of the Month for his performance in February. In total, he featured in 56 Thistle's games during which he made nine goals prorated through all tournaments.

On September 1, 2015, he joined the Glaswegian club, Celtic on a four-year deal. He though was loaned back to Caledonian on a season-long deal. The Celts, however, called him back in December 2015 before again dispatching him to Aberdeen on loan in January 2017. Before departing the Dons in 2018, he made 45 appearances for their senior squad including 10 goals.

He returned to Celtic for the 2018-19 season and since has scored 40 goals in 142 games. He received his first call up to the senior Scotland team for a friendly against the Netherlands in November 2017 while he recorded his first international goal on November 16 2019 in a 2-1 win over Cyprus in UEFA Euro 2020 qualification.

The five-foot-ten midfielder has been strongly preferred by the scouts of English teams like Burnley, Southampton, and the French team, Nice.

Ryan Christie's Net Worth and Salary

Since the new establishment, Celtic and Rangers have been the only two clubs to win the league and this has also reflected in their average annual player's salary, which is the highest at the Premiership tournament with roughly £896,000 per week. 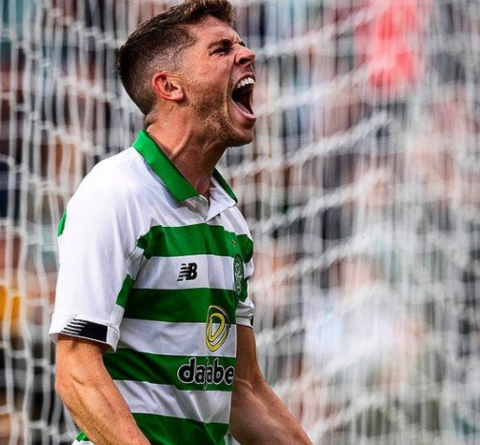 Ryan Christie made his debut for Celtic on 23 January 2016 in their 3–1 win over St Johnstone SOURCE: Instagram

He supposedly brought about £57,000 from the two seasons he played for Inverness Caledonian Thistle. That was followed by his gross income from 2016, the end of which saw him making here and there £190,000.

His salary was reportedly doubled for the season 2019-20; his then year-round pay allegedly added up to £400,000. Concluding his salary history, his career earnings tally at over £1.4 million. That said, Christie's net worth could probably be in the region of half of million pounds.

Ryan Christie's Girlfriend; Is He Married?

About two months after his 2018 Scottish League Cup win, Christie, through his Instagram, introduced Georgie Bell, who later turned out to be none other than his girlfriend. While the Celtic number 17 then selfie with Bell gave away almost all the story, it wasn't until his October 27, 2019, Insta episode that led the followers to believe he was taken for good and all.

The Bhoys' playmaker, though, publicly confessed his love for Bell on January 2, 2020. Wishing his girlfriend her birth anniversary, the Scottish midfielder wrote, "Happy Birthday G. Love ya, buddy." His partner Georgie Bell is a self-taught intuitive artist with her studios based in Inverness and Glasgow. She especially works on sketchbooks, commission arts, and abstract paintings. She has been studying contemporary art for a total of seven years, including five years at college and university, with a BA in Contemporary Art Practice from Robert Gordon University, Aberdeen, Scotland.