Ruben Estephan Vargas Martinez, aka Ruben Vargas, is a Swiss-based professional association soccer player playing in the Bundesliga for FC Augsburg, the club headquartered in Augsburg, Germany. His role in the team is as a winger. Not only that, but Ruben is also a member of the Swiss national football team and has represented 29 games for Switzerland in several international tournaments.

Being born in Adilgenswil, he only started his soccer career playing for the Adilgenswil local team. He is still in the early phase of soccer. Not to mention, he has just played for two clubs, including Luzernand FC Augsburg. For FC Augsburg, the Swiss international wears jersey number 16. Ruben has amazed everyone with his outstanding performance in several matches. Due to his potential, footwork, and skills, he is considered one of the future stars of the football world. His playing style is also compared to the Xherdan Shaiqiri, the former Liverpool man.

How much is Ruben Vargas's annual wage?

FC Augsburg winger Ruben Vargas is having a good taste of success in his soccer despite being 24 years of age. He competes in the Bundesliga, which is among the world's top leagues that play their player in six figures. Thus, he is making a good fortune from his football career. In the present context, Ruben's net value equals £1,520,080. Most of the earnings he made are from his soccer career. During his tenure at FC Luzern in 2017, his pay was £33,280 yearly, £36,400 in 2018. After joining FC Augsburg, Ruben received an annual payment of £4,16,000, including all his bonuses. 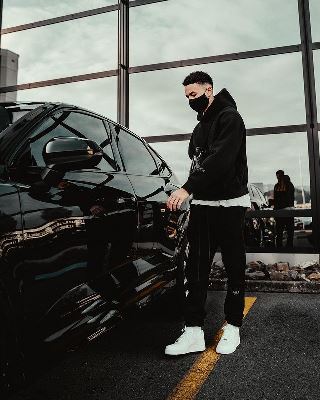 He is undoubtedly one of the wealthiest and most flourishing young swiss footballers in the meantime. He is also fashion enthusiastic and loves wearing branded clothes and sneakers. According to Salary sport, with an annual wage of £1,976,000 and £38,000 weekly, Tobias Strobl from Germany is ranked in the number one position. At the same time, Ruben is in 22 positions in terms of salary payment. On top of that, he gets remuneration from his nation being a Switzerland national football team player.

The Transfer market's market value of Ruben is listed as €8 million. His career-best was €13 million on 26 Nov 2020. Moreover, IFM is his agent that looks after all his transfers and signings.

Like other players, Ruben the winger is also sponsored by the sports brand called Nike. He is also a brand ambassador of Nike, which advertises its product online. He makes quite a fair sum of banknotes from it. However, the financial transaction between the two parties is still not transparent. Moreover, he is linked with other endorsement deals and commercial ads, which also nursed his bank balance.

Former Luzern winger Ruben is silent when it comes to relationship status. As a result, his girlfriend or spouse's name remains a mystery for now. It is his multiple-asked question, but still, he has not confirmed it. Maybe, he doesn't want to be in any kind of controversy or rumors by expressing it. His love life is hidden from the public domain. We can say he is deeply in love with his passion, playing football. Therefore, he has no time for dating and is busy with his soccer career. Also, no post on his media platform hints about his love life matter. We may conclude he is probably single at the moment.

Ruben Vargas was born on 5 August 1998 in Adilgenswil, Switzerland, under the sun sign Leo. His full name is Ruben Estephan Vargas Martinez. Due to the mixed nationality of his parents, he holds dual citizenship cards from the Dominican Republic and Switzerland. He was raised by a Dominican father and a Swiss mother. He spent most of his childhood days in Adilgenswil.

His father's name is Victor Vargas, and his mother's name is still unknown, as he has kept it in suspense. His father met his mother in Switzerland and later settled there after the marriage. Now, his father holds both Dominican and Swiss nationality. So far, there is no data on his sibling, so it remains a riddle. Vargas's family is Christianity by religion. They strongly follow and believe in its idealogy and values.

Along with him, his Augsburg teammate Stephan Lichtsteiune also hails from the same hometown. His height measure 1.79m or 5 ft 10 inches tall, and he weighs over 68 kg. He is a long shredded footballer with short hair and a wheatish skin tone. He prefers his right foot over his left foot.

His journey from FC Adilgenswill to FC Augsburg

He was 9 nine years old when he went to FC Adilgenwil to learn football. After a year, he went to Luzern football academy in 2008 and played until 2014. Similalry, he again transferred to SC Kriens. Prior to playing for FC Luzern in 2015, the proficient young footballer played a year for Kriens from 2014 to 2015. Due to his dribbling ability, pace, and impressive dribbling mastery, Luzern welcomed him to their senior team in 2017. On 27 August 2017, he made his debut game for FC Luzern against FC Zurich. 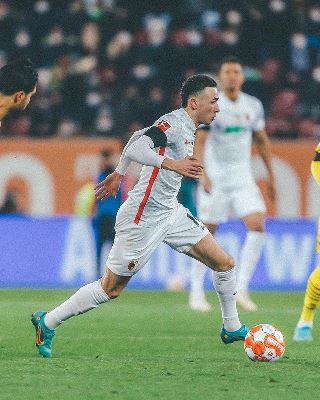 Ruben with FC Augsburg in the 2021-22 season SOURCE: Instagram

Reportedly, in his sophomore year with Luzern's senior team, he made a total appearance in 19 games with one goal, one assist, and three yellow cards in his name. In his two-year tenure, where he played in 50 games sending the ball nine times behind the net. Finally, in the summer of 2019, Ruben signed a five-year contract with Augsburg creating history by becoming the first Bundesliga player of Dominican origin. His first Augsburg goal came in his second match against Union Berlin in the 2017-18 season.

As of 2022, Ruben has recorded 95 Bundesliga games and three matches in DFB-Pokal tournaments. For the Augsburg, the Dominican descent is one of the vital players on the team.

Presence of the Switzerland national team

As I mentioned earlier, he holds dual nationality due to his mixed ethnicity. Legally, he can play for both nations if he wishes to. But as of today, the professional has just played for Switzerland. He is the Switzerland youth international who initially represented Switzerland at the U21 levels in 2018. The athlete got his first call for the Switzerland national team in 2019 for the EURO 2020 qualifiers. He

made his debut on 8 September 2019 in that competition only.  Similarly, Ruben also played seven world cup qualifiers games to date. For your information, Ruben is also the probable candidate for the 2022 FIFA World Cup from Switzerland national team.

The 5 ft 10 inches tall Ruben 24 is available on Instagram and Twitter. He is active on Instagram under the username @iamrubenvergas, with a fan following of 70.7K. He has overall 41 posts there which are almost full of his football career shots. Likewise, On Twitter, we can follow him under the username @Ruben Vargas. He publicizes his sponsorships and businesses here. He is one of the Dominican-Swiss footballers with the most searched and followers on social media platforms.

Stay tuned to Playerswiki for more interesting facts, bios, and gossip about players.