Rodolfo Cota was born Rodolfo Cota Robles on July 3, 1987, in Mazatlan, Mexico. He rose to fame only after his successful career and has not shared much about his early life and his parents. Talking about his physical appearance, Cota stands six feet and height and weighs 88 kg.

Know About Rodolfo Cota's Net Worth, Salary and Earnings

Rodolfo Cota Cota has an estimated net worth of more than $5 Million. The player credits most of his net worth to his successful career in football. A football player makes a handsome amount from their sponsorship and advertising deals. Cota is among the highest-paid player currently playing for Leon. Rodolfo has an annual salary of £728,000 playing with Leon. He receives a weekly wage of £14,000. His fellow teammates, Angel Mena and Luis Montes, have similar earnings and salaries. Cota must be receiving a good sum of money for representing Mexico in international events.

Rodolfo is a married man living a happy married life and his wife and their children. Cota walked down his wedding aisle along with Fany Gurrola. The love birds exchanged their weddings vows in July 2014. They had been dating each other for several years before tying their wedding knot. 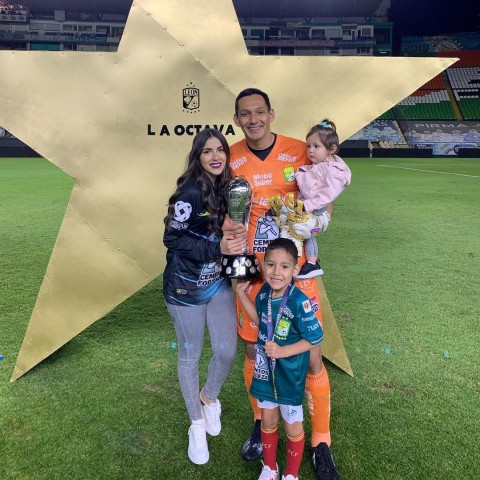 Rodolfo shares a photo with his wife and children SOURCE: [email protected]

In September 2015, Rodolfo shared about expecting their first child together. The duo was blessed with a son, Ian, in March 2016. Cota likes to spend most of his free time with his family. In January 2020, The player welcomed his second child, a daughter, Isabella.

Rodolfo started training with local clubs in his early teens. He earned his professional debut in 2007 with Pachuca against Veracruz. He signed numerous contracts with the club and extended from time to time. It was very difficult for him to become the first-choice keeper for the club. After playing with the club for six seasons, In the 2014 season, Cota was loaned to Puebla in the same league for a season.

Rodolfo appeared in a thrity-one game for the club and helped the team in the Copa MX. The following season, He was loaned to Guadalajara. In the same season, The player became a key player and helped the team win the Liga MX title. Rodolfo was named in the Best XI of the tournament and won the Golden Glove award for the season. In 2018, The team won the CONCACAF Champions League title against Toronto FC and was rewarded the Golden Glove of the tournament.

In early 2018, Leon was loaned to Leon, but He terminated his contract with Pachuca after being with the club for almost a decade and signed a major deal with Leon.

Rodolfo earned his first call for the national team in 2007 with the U20 team. After waiting for ten years, He was named for the senior team in 2017 and has appeared in six international games for Mexico.