Robert Skov is a professional football player originally from Spain who currently plays for Bundesliga club 1899 Hoffenheim. Despite being born in Spain, he represents the Denmark national team as he came to settle in Denmark with his family just at nine months. Furthermore, Skov was also included in the Denmark team for the 2016 Summer Olympics.

Skov is one of the most important players on his team as he has helped them to win various titles. Before coming into 1899 Hoffenheim, he played for multiple teams, and his football career started with Sejs-Svejbæk IF. Not to mention, Skov is a skilled winger who is most noted for taking on defenders and dribbling past them. Not only that, but Skov is also famous for scoring many goals and making numerous assists.

Robert Faxe Skov was born on May 20, 1996, in Marbella, Spain, making his age 26 years old as of 2022. His parents moved from Denmark to Spain in 1994 when his dad had a job with a bank in Gibraltar. So, Skov was born in Marbella, but his family moved back to Denmark when Skov was just nine months old. 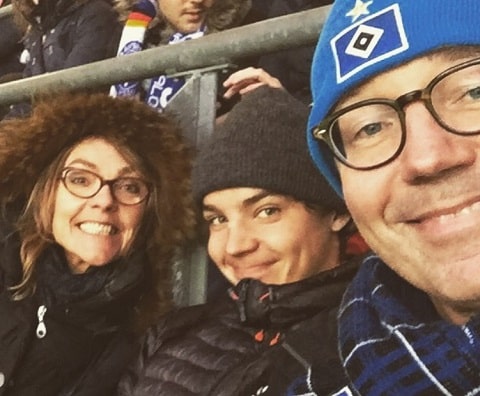 Robert Skov with his father and mother SOURCE: Instagram @robertskov

So, Skov holds Danish nationality and his height measurement is 6 feet 1 inch. The professional footballer has not talked much about his family background. So, the names of his parents remain unknown.

As said earlier, Skov started his career with the youth academy at Silkeborg. So, he made his league debut on May 16, 2013, by playing against Midtjylland. During that time, he was just 18 years old. And on October 19, 2014. Skov scored his first league goal in a match against FC Midtjylland.

His performance was loved by many people, and he also helped his team to win the Danish 1st Division in the 2013-14 season. In the 2016-17 season, Skov scored ten league goals and became the team's leading scorer. After that, Skov went on to play for Copenhagen in January 2018. His debut for the group of Copenhagen came on February 10, 2018, winning a game against Randers. 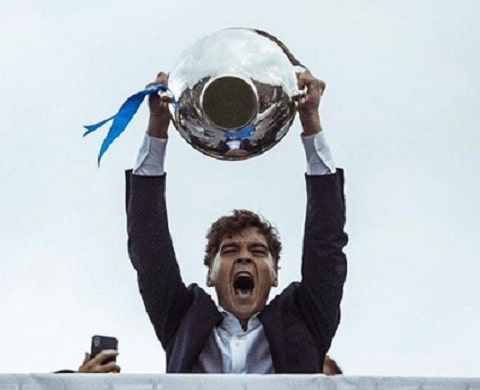 On February 25, 2018, Skov scored his first league goal for the club. He was doing pretty well, and on December 2, 2018, he scored his first club hat-trick versus Horsens. Same as the 2016-17 season, Skov finished as the top scorer in the 2018-19 season and also broke the all-time Danish Superliga record by scoring 29 league goals.

So, in 2018, he was named Danish Player of the Year. Impressed by his performances, some big clubs like Tottenham and Arsenal started to look to sign him. Apart from that, he signed a contract with 1899 Hoffenheim in July 2019, and since then, Skov has been with the team appearing in various games. For 1899 Hoffenheim, Skov scored his first goal on November 1, 2019, against SC Paderborn.

Besides being a prominent player in his club, Skov is also counted as an important player on the national team. He played in various games in the 2016 Summer Olympics after being included in the team in July 2016. Likewise, Skov was included in Denmark's preliminary 35-man squad for the 2018 World Cup, which was held in Russia. In the same way, Skov played in the UEFA Euro 2020 qualifying tournament and made his debut on June 10, 2019, against Georgia. 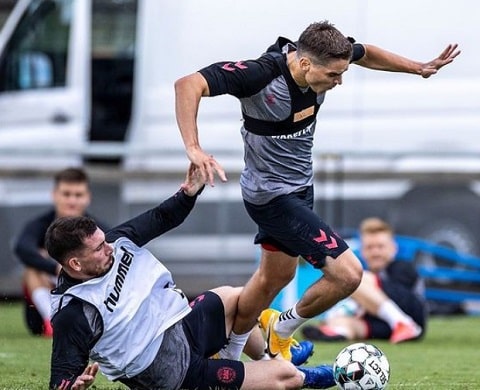 Moreover, Skov didn't miss any chance to represent his country and played the 2020 UEFA Euro. Further, he is still active in this field and is doing really well in his career.

Well, the professional footballer is currently in a relationship with his girlfriend named, Josephine Gyldenvang Moller. The lovebirds have been dating each other for quite a long time. Exploring their social media handles, we can say that Skov and Moller are in a serious relationship, and they love visiting places together. 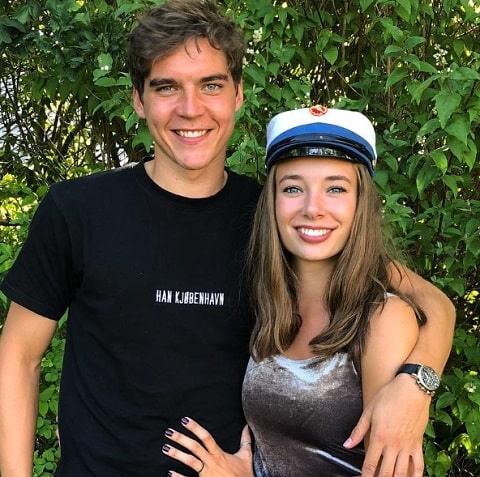 The pair have gone to different places together. Not only that, but they have also shared multiple snaps on their account, from which it can be said that the duo loves featuring their life on social media. Apart from that, Moller is also a supportive girlfriend who has appeared in various games of Skov to cheer him up.

Robert Skov makes a good sum of money from being a professional football player. Currently, he plays for Bundesliga club 1899 Hoffenheim, and a source reports that his salary per week is £31,000 and per year is £1,612,000. From this, it can be said that his net worth is not less than a million dollars.

In the past, Skov represented multiple teams and took home an impressive profit. When joining FC Copenhagen, he reportedly signed a deal worth 7.5 million Danish Kroner which is $1.03 (USD). After playing for FC Copenhagen, Skov had a mind-blowing deal, and it is reported that his transfer fee was €10 million.

From this, it becomes clear that Skov is making a massive amount of money from his team, and his income will increase more in the future as he is playing actively for the squad. Apart from that, he has also played for the national team in various famous events. His performances have led his team to win some titles that might have helped him receive good cash prizes. 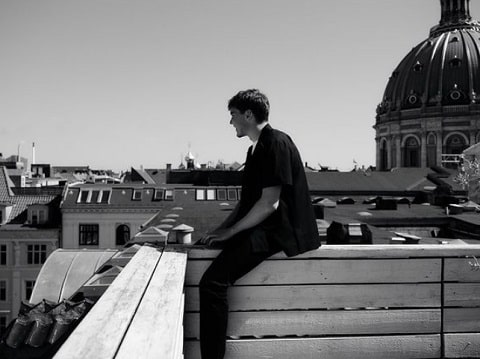 Moreover, Skov lives a lavish life, and he shows off his lifestyle via his social media handles. Not to mention, Skov might have collaborated with some sports brands, which are his other source of income.

Robert Skov is an active social media user who is verified on Instagram under the username @robertskov. At the time of this writing, Skov has been followed by more than 36.6k followers. On November 30, 2012, Skov made his first post on Instagram.

Since then, he has been featuring his personal and professional life in his account. Apart from that, his girlfriend, Moller, also uses IG as @josephinegylden.