Rita Benson LeBlance is an NFL executive who previously played the role of Vice Chairman of the Board of the New Orleans Saints of NFL. Being a granddaughter of then-current Saints and Pelicans owner Tom Benson, Rita was known to be Benson's intended successor as principal owner of the team. However, Tom suspended her role on account of her "sense of entitlement" in 2012.

Houma, Louisiana native, Rita Benson was born on 11th January 1977, under the star sign Capricorn. The forty-five years holds an American nationality and is of white ethnic background. She is the daughter of Russell LeBlanc and Renee Benson. She has a brother, Ryan LeBlanc. Completed her high schooling at Lyndon B. Johnson High School, she earned a bachelor of science degree in agribusiness at Texas A&M University in 2001.

While still in high school, Rita Benson started interning for various league offices including Saints. In 2003, she became the management of AFL's New Orleans VooDooo, also owned by Benson. Later, she was named the indoor league's top executive. What's more, in the aftermath of Hurricane Katrina, she started to take on a more public role and greater responsibilities in the management of the Saints. 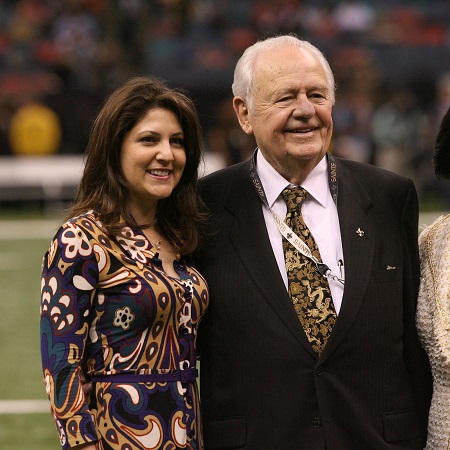 Once the chairman of the NFL Employee Benefits Committee, she has previously been his handpicked successor. as principal owner of the team. Nevertheless, in 2012, Tom Benson suspended LeBlanc from her jobs on account of her "sense of entitlement."

On 21st January 2015, Tom Benson, then-current Saints, and Pelicans owner, announced his plan to transfer the ownership of the sports franchises owned by him to his wife, Gayle, when he dies, effectively dismissing Benson's granddaughter. Benson said the change is necessary to "ensure the long-term stability and success" of the sports franchises and his other business interests. Tom originally planned for the clubs and other business properties to be run by his daughter, Renee, and her children, Rita Benson LeBlanc, and Ryan LeBlanc.

Then Rita sued her grandfather for control of his companies, claiming he was "incompetent." The lawsuit seeking to block the succession change was filed in Orleans Parish Civil District Court Tom called the lawsuit meritless and false.

How Much Is Rita Benson LeBlanc Net Worth In 2022?

Though Tom Benson excluded his daughter Renee and grandchildren Rita and Ryan from his will, it doesn't affect many million dollars' worths of the property, still, the three summoned much from the family patriarch. 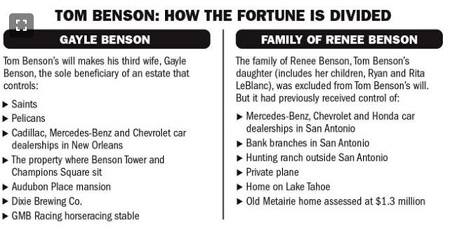 How the fortune was divided SOURCE: NOLA.com

Following, a complex, two-year case, Benson finally left them with control of three car dealerships, bank branches, and a hunting ranch, all in and around San Antonio, Texas. Other property they gained control of while Benson, 90, was alive included a private plane, a home on Lake Tahoe, and a two-story Old Metairie home assessed at $1.3 million.

No doubt, Rita Benson has millions of dollars, her exact figure of worth is yet to reveal.

Rita's love life is entirely in a dark shade. Besides her professional and family issue, there is no news popped out in the media regarding her love affairs or boyfriend. A member of the renowned and wealthiest family, she has always lived her personal life low-key. Since there are no confirmation about her romantic partner, she is believed to be single.