Rifat Zhemaletdinov is a professional football player from Russia who currently plays in the Russian top league, the Russian Premier League. He plays in the right-winger position for Lokomotiv Moscow where he joined in 2018. He wears the Number 17 Jersey for his team.

He is a 2 times winner of the Russian Cup which he won in 2018-19, and 2020-21. He also won the Russian Super Cup in 2019. Internationally, he has also represented Rusia in the international tournament. In 2013, he won the UEFA Under 17 Championship. Besides, he was also in the Russian national squad of the UEFA European U-19 Championship runner-up.

Rifat Maratovich Zhemaletdinov, famously known as Rifat Zhemaletdinov was born on September 20, 1996, in Moscow, Russia. According to astrology, his birth sign is Virgo. 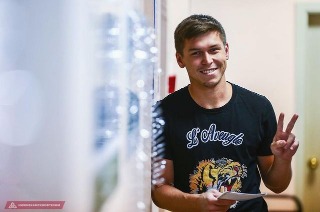 There is no detailed information about his parents. His father's name and mother's name are not revealed yet.

Also, he has not shared information about his siblings too.

He is the home product of his current club Lokomotiv Moscow. He joined the youth team of Lokomotiv in 2001 when he was just 5 years old.

He was promoted to their senior squad in 2015. In 201, he moved to another club Ruben Kaan where he played for 2 years.

In 201, he again returned to his childhood club where he is currently not playing.

Rifat's net worth and earnings

The net worth of the young winger of Lokomotiv, Rifat is estimated to be 2 million pounds approximately His earnings mostly come from his playing career with the Russian club. Read: How Much Rich is Louie Moulden in 2022? (Salary and Net Worth)

As per transfermarkt, the market value of Rifat is 7.5 million pounds in 2022.

Who is Rifat dating? His Relationship Status and dating life

Lokomotiv's winger Rifat Zhemaletdinov is currently in a relationship with his girlfriend whose name is not revealed yet. The couple has been together for more than 3 years as of 2022.

Though the footballer has shared his photos with his partner, he has barely mentioned anything to her. That too implies her name. As of now, the pair has not revealed their further marriage plan But their relations seem going nice as of now.

Read: Who is Genoa's center-back, Vasquez girlfriend? (Affair and Relationships)

Zhemaletdinov is an active social media user who has made his presence on Instagram.

His Insta Id is @rifatzhemaletdinov and has more than 23,000 followers.