Wales international Rhys Llewelyn Norrington-Davies, aka Rhys Norrington, is a professional soccer player at Sheffield, South Yorkshire-based club Sheffield United as a defender. He is also associated with Wales national football team since 2017. Furthermore, he has played for numerous English Premier Leagues and EFL League Two football teams such as Barrow, A.F.C, Rochdale A.F.C, Luton Town, Stoke City, and Sheffield United. Also, he is on the list of famous Welsh soccer players born in Saudi Arabia.

Rhys Norrington, the former Barrow A.F.C defender, is a Welsh nationality player born in Riyadh, Saudi Arabia, in 1999. He lights up his birthday candles every 22nd of April year. In the meantime, the athlete is in his early 20s, i.e., he is 23 years old. Rhys's defensive ability has stunned everyone. His uniform game form is in every game for his club, and the national team has proved himself as a crucial part of the team. He prefers using his left foot over his right. Additionally, he represents himself by wearing 33 for his current team jersey. However, he is given 17 as his jersey number for his nation.

Have a look at Rhys Norrington's juvenility days and family members

Rhys Norrington is born with the family name Rhys Llewelyn Norrington-Davies under the zodiac sign Taurus. Despite being Welsh, his birth took place in an Asian country. His father belongs in the military field. Notably, he is a retired British army that served overseas for many years. Due to his father's job, Rhys often migrates from one country to another. When his family moved to Kenya, London, and Aberystwyth, he was just a child.

Keeping in mind that, Rhhys' parents are the Aberystwyth natives. Concerning his family details, Rhys was born to his father, Patrick Norrington, while his mother remains under the radar. He seems to be the only child in his family. Due to frequent moves, he attended several schools. Rhys was educated at Ysgol Penglais and Royal Russell School in Croydon, South London.

Everything in his professional life and career review

As most of his boyhood time was foregone at Aberystwyth, Rhys Llewelyn Norrington-Davies began his soccer journey at the local football club Bow-street. Afterward, he played for Aberystwyth Town and Merstham. In 2017, he went to the EFPL side, joining the Swansea football academy. After a season with the Swansea youth system, he joined the other EFL fellow club Sheffield United for the 2017-18 season. Just a year with the Sheffield youth team, he got promoted to the Sheffield United senior squad for the 2018-19 season. Despite his short span of time there, he recored 31 matches in his debut season. Subsequently, after a few months, he joined Barrow on a one-month loan in September 2018, which later got extended to the end of the season in October. 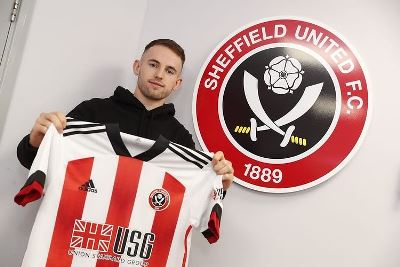 As a Barrow defender, the Wales international appeared in 28 games without a goal on his scorecard. Ending his loan contract with Barrow, Rhys moved to the English LeagueTwo club Rochdale A.F.C. the following season in 2019. There, he played 27 Football League matches, scoring one goal, a single game in Football League Trophy, and two in EFL matches. From Rochdale, he was again loaned out to Luton Town for the following season for two years on 3 September 2020. However, his former club Sheffield United again called him off on 12 January 2021.

After making 22 league appearances in all competitions for Sheffield, he joined the Stoke City Football club. For Stoke City, he played 22 times, adding one goal to his tally. Everything was going exactly the opposite as Rhys thought. He was struggling to make his consistent spot for a specific team. Shortly after his loan contract expiration, he is back at his fomer club Sheffield United. After his return, he made 24 appearances with one assist in the 2020-21 season and nine games for the ongoing season. His contract with Sheffield ends on 30 June 2024 per the Trasfermarkt.

The 23 years old defender Rhys Norrington is a footballer measuring his height at 1.81m or 5 ft 11 inches tall. His body is muscularly built and has a long body struture. Also, eyeing his exercise reels on Instagram, he regularly hits the gym. Rhys is a good-looking footballer with a fair skin complexion for his outer appearance. He is a health-mindful individual with a balanced body mass index weighing 68 kg. In addition to that, he has blonde hair and a trimmed beard over his jaw.

Rhys Llewelyn Norrington-Davies is a Wales youth international. Prior to making his senior team appearances, Rhys recorded several matches at Wales U19 and U21 level playing 17 games in several international contests. He received his first call from the Wales senior squad after his U21 performance in 2020. He was called up to the national team in September 2020. 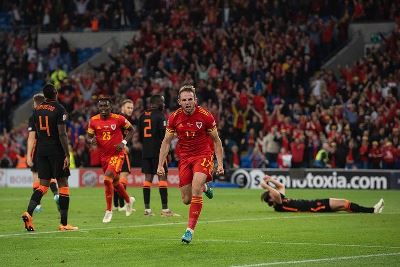 Rhys was celebrating his gaols against Netherland in 2021. SOURCE: Instagram

However, his international debut for Wales was on 14 October 2020, coming as a starting XI player against Bulgaria. After his outstanding performance, the professional was selected to the Wales squad for the delayed UEFA EURO 2020 tournament. Indeed, his first-ever goals came in the UEFA Nation League against the Dutches on 8 June 2022. As of today, the 23 years old defender has reached twenty games in his stats for his national team. He reportedly contributed to his nation at several world cup qualifiers games in 2020.

Know about Rhys' net worth and earnings from his profession

Ryan is still grinding hard to make his stable career. Having said that, he is one of Wales's probable and talented upcoming future stars. He creates most of his earnings playing for the football clubs. According to our research and other sources, Rhys, the Riyadh-born soccer player, has an approximate net worth of between $1 million and $1.5 million. As said earlier, he is still struggling, so the salary he nets playing from Sheffield is £6,700 weekly, and he receives £3,48,400 per annum. He is still in the early phase of his career.

Therefore, he is yet to make millions in the near future. Like other footballers, he also makes quite a sum of fortunes from his sponsorship, brands, saleable ads, and endorsement deals. For your information, Rhys has a trending worth of €2.50 million which is his career highest too. New Era Global sports is his agent that deals with his soccer-related activities.

Who is Rhys dating currently?

Rhys appears to be a self-centered individual who prefers to keep his matter to himself. Observing his social media post, he doesnt to have a girlfriend at the moment. However, due to his suspense character, who knows, he might be dating privately. Neither he nor any other sources have revealed anything about his love life matter, due to which we may conclude that he is not dating anyone and is probably single.

Rhys Norrington does not post quite often on his social media platforms. However, we can find him on Instagram under the username @rhys.norringtondavies. The player has 12K fan followings on that blue tick feature account. Also, his snaps there are full of his football career. We can easily access his football-related happenings and events by visiting his Instagram account. Moreover, he is also one of the renowned faces in Wales.

Visit Playerswiki for athletes' bios, net worth, and rumors.