Reginald Jacob Cannon, a.k.a. Reggie Cannon is an American footballer who is currently playing for the FC Dallas in Major League Soccer (MSL). During his high school, he played for the FC Dallas academy team and played a season for college soccer at the University of California, Los Angeles.

Chicago, Illinois native Reggie Cannon was born on 11th June 1998, under the star sign Gemini. The twenty-tow years holds an American nationality and belongs to the white ethnic background.

How Much Is Reggie Cannon's Net Worth And Salary As Of 2020?

In March 2020, the FC Dallas announced the 21-year-old defender agreed to a new four-year extension deal with a club option in 2024. The terms of Cannon’s new contract were not disclosed. His salary history is disclosed below:

Besides, his other source of income is considered the United States national team, where he has been capped 11 times with no goals. Also, he earns much from his endorsement deal with Adidas. As of 2020, his net worth is approximately $0.1 million.

Reggie Cannon is married to Kendall Cannon. They tied the knot on 18th April 2020, keeping it to quarantine guidelines. They could not invite their friends duo to pandemic COVID. Earlier, that year the couple got engaged on 1st December.  Scrolling through their Instagram, the duo seems to be together since 2018. 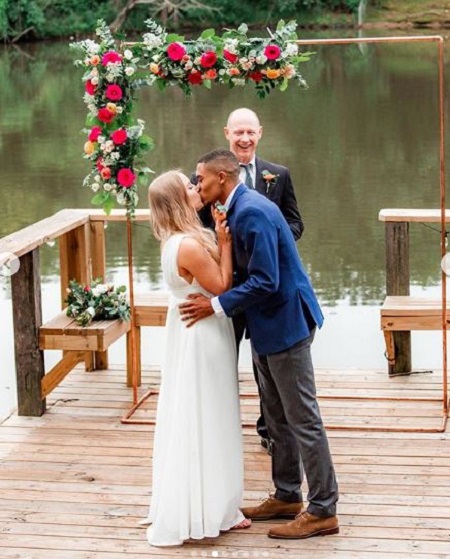 Reggie Cannon is seen flaunting pictures with his wife, Kendall Cannon. On the other hand, Kendall has set her IG account private.

Reggie Cannon was born to Tracy Cannon-Smith and Walter Cannon. He has three brothers, Trey, Colin, and Bryce and two sisters Rachel and Bianca. As reported, his step-father played football at Dartmouth and his mother played rugby at Brown.

While enrolling at the Grapevine Faith Christian School in Grapevine, Texas, Cannon played for the school team. During his freshman year, his school team won the TAPPS Division 2 Texas state championship. In high school, he played for the FC Dallas academy team. Upon graduation, he attended the University of California, Los Angeles. He played a season for the college soccer team, playing 20 competitive games.

Further, Cannon dropped the college and signed a homegrown player contract with FC Dallas on 22nd December 2016. On 14th June 2017, he made his professional debut in a 2-1 victory against Tulsa Roughnecks in the Lamar Hunt U.S. Open Cup.