If you love watching Major League Soccer then, Raphael Wicky must not be a new name. Raphael is a rising Swiss football coach and a former player. Raphael is currently working as the head coach of the Chicago Fire in the MLB. Wicky played in the professional league for more than fifteen years and represented Spain for International matches.

Raphael Wicky was born on April 26, 1977, in Leuggern, Switzerland. He did not come from a reputed family and had to struggle in his career to rise to fame so, much about his early life and information about his parents and siblings is under the radar. Wicky stands five feet and ten inches tall and weighs 73 kg.

Raphael started training football with the Youth team of Steg in 1984. He played and trained with the youth team of Steg until 1990 and then moved to Sion and made his professional debut with the club in 1993. Wicky spent his first four seasons with the club, appearing in 130 games. In 1997, Raphael moved to the German league, Bundesliga, and signed with Werder Bremen.

Raphael played with the club until 2000 and then moved to Spanish giants Athletic Madrid. However, After appearing in eleven matches, He returned to the Bundesliga in December 2001. Wicky signed for Hamburger SV until the end of the season with the option to extend until June 2005. In 2007, Wickey moved back to his former club, Sion, and signed a three-year contract. The Swiss player ended his professional career in 2008 with Chivas USA in Major League Soccer.

Raphael made his international debut in 1996 with the Switzerland team at the Euro 1996. He was part of the team in the Euro 2004 and 2006 World Cup. In his international career of more than twelve-year, Wicky appeared in seventy-five matches and scored one goal.

Raphael led the team for the eighth consecutive league title. In July 2018, He was sacked after failing to qualify for the second round of the champions league. In March 2019,  Wicky was named the head coach of the United States Under-17 Men's National Team.  MLB side, Chicago Fire hired him as their new head coach in the MLB in December 2019.

Raphael is a married man living a happy married life along with his wife. Wicky is married to his longtime girlfriend, Laura, in December 2018 in Los Angeles. They had been seeing each other for several years before tying the wedding knot. 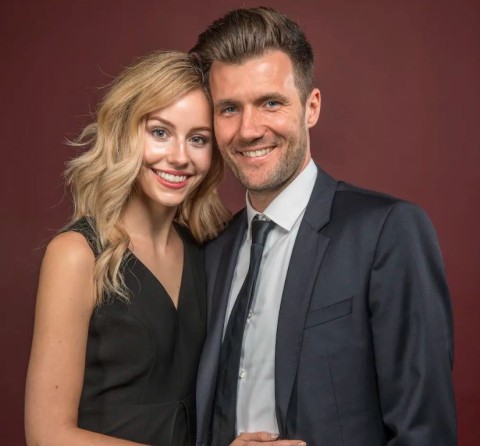 Raphael, along with his wife, Laura, attending an event SOURCE: Blick

Unlike other managers, Wickey does not show much presence in social media and has not shared a word about his married life and wife.

Raphael Wicky's Net Worth and Salary

Raphael Wicky has an estimated net worth of more than $2 Million. He must be making a six-figure salary for working as the head coach of the Chicago Fire. The highest-paid head coach for the MLB in 2021 is Terry Francona working for the Cleveland Indians. Raphael must have earned a reasonable amount through his career as a football player.