Rafael Galhardo de Souza, a.k.a. Rafael Galhardo, is a Brazilian professional footballer signed to Valour FC as a right back. He is yet to make an international debut but has represented his national side at the domestic level; Brazil's U20 national team.

How Much Is Rafael Galhardo's Net Worth In 2022?

Aforementioned, Rafael Galhardo is signed to the Canadian Premier League side, Valour FC, where his annual salary is $50,000 per annum.

Besides, endorsement and sponsorships are another good income source for footballers.

As of 2022, Rafael Galhardo's net worth is approximately $1 million.

Rafael Galhardo is married to Priscila Gomes in December 2013. The couple dated long before tying the knot.

Galhardo wrote, "The most special moment of my life has arrived! Very happy to be able to fulfill a dream next to the woman of my life! Thank you all for the messages and to all those who will participate in this magical moment in my life. It's all perfect. If I could ask God for anything, I would ask my brother to be here with me physically, but I'm sure he's from heaven watching over us and very happy with everything that is happening in my life! My eternal brother, will always be present in my life! I love you so much @ priscilagomes001, this will just be the beginning of the beautiful story that God has prepared for us." 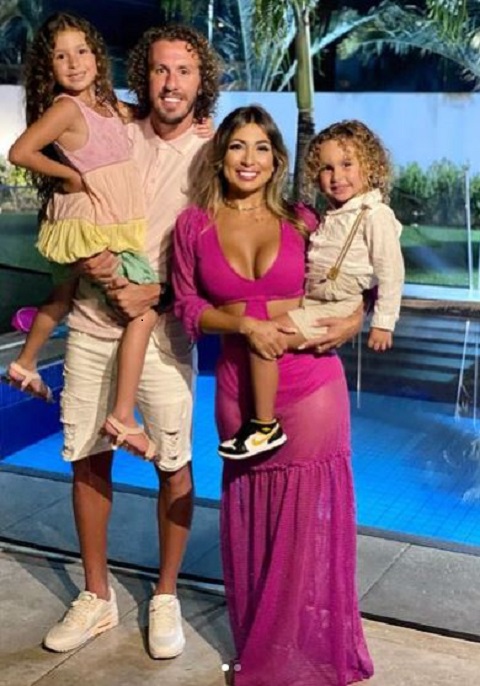 In June 2018, they had their second child, a son Lorenzo Rafael.

Rafael Galhardo is active on Instagram with 104k followers. He often shares family photos on his socials.

Galhardo began playing football with Friburguense in 2007. The following year, he joined the youth system of Flamengo.

He made his first-team – and Serie A – debut for Flamengo, coming on as a second-half substitute for Jorbison in a 1–2 home loss against Cruzeiro on 20th August 2009.

In 2010, he was officially promoted to the senior squad of Flamengo. On 27th April 2011, he scored his first goal, netting the first in a 3–0 away victory over  Horizonte, for the year's Copa do Brasil. Overall, he played 32 games.

On 7th January 2016, Galhardo joined Belgian Pro League side Anderlecht for a €1 million transfer fee. He played only a match for the club. Further, he also had a loan stint with Atletico Paranaense.

In 2017, Galhardo moved to  Cruzeiro. He played only two games, and Cruzeiro released him at the end of the season.