Peter Vindahl Jensen is a professional footballer hailing from Denmark. Currently, he plays as a goalkeeper for Eredivisie club AZ Alkmaar. He has been playing for AZ Alkmaar since August 16, 2021, and the contract expires on June 30, 2025. Furthermore, Jensen's career started at Hørup Ungdoms- og Idrætsforening (HUI).

Before joining Eredivisie club AZ Alkmaar, Jensen played for Nordsjælland from 2015 to 2021. With his former team, he had an outstanding career, and he gave his best in every game. With the team of Nordsjælland, Jensen made 55 appearances but didn't score any goals. Besides that, Jensen has also represented the Danish national team in various events.

Born on February 16, 1998, Peter Vindahl Jensen's age is 24 years as of 2022. The young footballer was interested in playing football from an early age. So, Jensen aimed to pursue a career in this field. Not to mention, Jensen spent his early days in Helsingor, Denmark.

So, Jensen holds Danish nationality, and he stands at an impressive height of 6 feet 6 inches (1.98 m). Besides, Jensen is a family person who loves spending time with them in private. So, due to his private nature, not much is known about his family background.

Insights On His Career

As said earlier, Jensen started his career by playing at Horup Ungdoms- og Idrætsforening (HUI). After spending some time at HUI, he went to Lyngby Boldklub. And when he turned 17 years old, Jensen joined the Nordsjælland academy in January 2015.

Just after a few months, Jensen started training with the first team. Without making any appearances for the team, Jensen was included in the first-team squad 11 times in his first season at the club. And in January 2016, he became a permanent part of the first team squad. 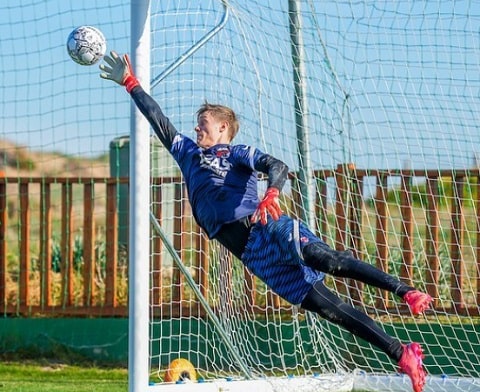 In the same way, he didn't make any appearances in the following two seasons either, despite being on the team for 19 league games in total. Finally, in the 2018-19 season, he made his official debut while playing against HB Koge in a match against Danish Cup, which was held on September 26, 2018, and the game was won by his team.

Likewise, on March 30, 2019, Jensen made his Danish Superliga debut against FC Midtjylland and the match ended in a 0-0 draw. Furthermore, his contract with the team was about to expire. So, he signed a new contract extension on January 10, 2019, in Nordsjælland until 2022. However, he got a chance to play for another team, and on August 16, 2021, the 6 feet 6 inches tall player signed a 4-year contract with Eredivisie club AZ Alkmaar. 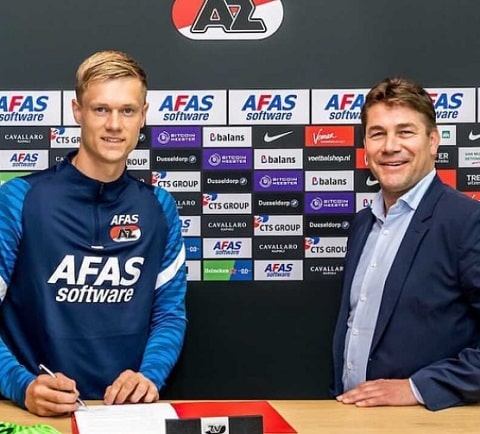 Apart from his career at clubs, he has also played for the national team. For your information, he was training with the Denmark national team in March 2018. Later, he was called to play for the senior Denmark squad for the 2022 FIFA World Cup qualification against the Faroe Islands and Scotland.

Currently playing for Eredivisie club AZ Alkmaar, Jensen surely receives a decent salary, but the actual amount of his payment is missing from the web. For your information, a football player in Denmark has an average salary of $44577.48 per year and $21.46 per hour. So, we can assume that Jensen may earn in the same range being a professional footballer. So, from this, it becomes clear that he may be earning a good sum of money from his club. Apart from making from his profession, he may take some profit from sponsorship and endorsement deals. Being a footballer, he might have worked with some sports brands that will surely help him increase his earnings. Not to mention, Jensen is currently associated with MB Sports. In conclusion, Jensen lives a quality life with his impressive gains.

Coming into his personal life, Jensen is currently in a relationship with his stunning girlfriend, Simone K Rasmussen. The loving couple is leading a happy life together, supporting in every step of their life. Exploring their social media posts, we can say that the duo is having a good time, and they love going to different places together.

They not only explore places but also shares them on their social media handles. Furthermore, Jensen has been dating his girlfriend for five years now and recently, Simone posted a photo of them on Instagram on the occasion of their five years of togetherness. 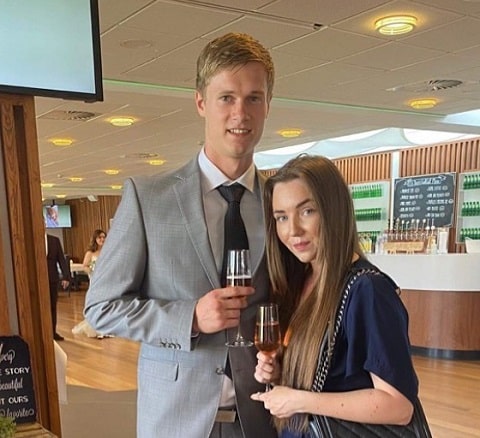 Moreover, Jensen's partner appears to be a fun-loving person as she frequently shares various snaps with her boyfriend on her Instagram handle. So, the couple's love is growing daily, and they are doing great in their life.

Peter Vindahl Jensen is an active social media user who has been using Instagram for a long time. His Instagram username is @petervindahl, and at the time of this writing, he has gained more than 4k followers. Also, Instagram has verified his account.

Besides that, his girlfriend, Simone, is also an active Instagram user whose username is @simone_k_rasmussen and has been followed by more than 1k people. As per her IG bio, she is from Copenhagen and now resides in Amsterdam. Her bio also shows that she studies at Copenhagen Business School. Her Instagram account is full of numerous pictures with Jensen. So, it can be said that she loves featuring her personal life on social media.