Pavel Datsyuk is a professional ice hockey player who is currently playing in the Kontinental Hockey League(KHL) for the Avtomobilist Yekaterinburg as their centerman. Previously, he played in the National Hockey League(NHL) for Detroit Red Wings.

Pavel, nicknamed as  "The Magic Man," is among the 100 greatest NHL players. The 2-time Stanley Cup winner, Pavel also won the World Championship with Russia in 2012 and was Captain of the Russia men's national ice hockey team for the 2014 Winter Olympics.

How Much is Pavel Datsyuk's Net Worth and Salary?

Pavel Datsyuk is among the highest-paid NHL players of his time and earned an incredible amount from his NHL career. His total career earnings are reported to be around $77 million. Moreover, he is currently playing in the KHL, and from there, he is supposed to have earned around $10 million.

Datsyuk's current net worth is estimated at above $50 million as of 2019. He received a salary of $7,500,000 in his last NHL season. Currently, he is projected to be earning more than $2 million from the KHL team.

He played over 15 seasons in the NHL, so it is obvious that his career earnings is over $77 million since professional NHL players earnings are quite high.

In addition to his financial earnings, he also possesses some expensive properties like cars and houses. Currently, he is living in his Bloomfield Hills luxurious mansion, which is worth millions of dollars. Moreover, he also owns several other houses, but the exact information is yet to be revealed.

Furthermore, he also has a beautiful car collection, and his car collection includes some of the expensive car brands of recent time.

The famous ice hockey player Pavel Datsyuk is a married man and is currently enjoying his marital life with his wife. Pavle tied the knot with his girlfriend Maria in 2012 in front of family and friends.

Pavel and his spouse Maria are blessed with two children:  Vasilisa ( born on 23 April 2014) and  Pavel Jr.(born in 2017). Pavel and his wife have deep love between them, and so far, there are no signs of divorce. 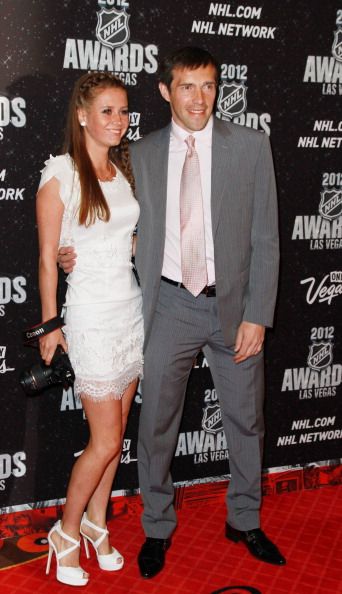 Pavel and his wife Svetlana were together since they were just 18 years old. They were high school sweethearts, and after they got married, she gave birth to a daughter named Elizabeth in 2004. 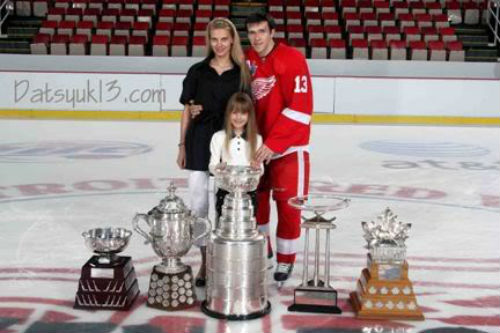 Pavel with his former wife and daughter SOURCE: Player Wags

After spending more than a decade together, Pavel divorced with his wife in 2010, but the reason for their divorce is still a mystery.

Who is Pavel Datsyuk? Know about his Childhood

Pavel Datsyuk was born as Pavel Valerievich Datsyuk on  20 July 1978, in Sverdlovsk, Russian SFSR, the Soviet Union to parents Galina and Valen. He holds Russian nationality and belongs to the white ethnic group. He had an awesome childhood with his siblings.

Pavel Datsyuk is a professional ice hockey player who is currently playing in the Kontinental Hockey League(KHL) for the Avtomobilist Yekaterinburg as their centerman. Previously, he played in the National Hockey League(NHL) for Detroit Red Wings.

He began his NHL career when Steve Yzerman was the captain of the Detroit Red Wings. He played over 15 seasons in the National Hockey League(NHL). After he ended his NHL career in 2016, he began playing for the SKA Saint Petersburg.

In addition to his club career, he also played for the Russian national ice hockey team. Some of the other famous NHL players are Claude Julien,  Jakob Silfverberg, Cam Fowler.

Further biographies of popular NHL players are available at Playerswiki