Harlesden, London native, Paul Merson was born on 20th March 1968, under the star sign. He holds an English nationality and is of white ethnic background. He stands 1.82 m (6 ft 0 in) tall.

A youth product of Arsenal, Paul Merson made his professional football debut in the 1986–87 season with Arsenal. He played eleven seasons with the North London club, appearing in 317 ga, es with 78 goals. He was a  key player in the club's success winning 2 Football League Championship, the FA Cup, the Football League Cup, and the European Cup Winners' Cup.

In 1997, he moved the  Middlesbrough. Though he played only a season for Middlesbrough, he helped the club gain promotion to the Premier League and finish as runner-up in the 1997–98 Football League Cup.

In 1998, he signed to Aston Ville where he remained until 2002, appearing in 101 games with 18 goals. Then he went to play for Portsmouth where he captained the squad. Also, he played for the team in the 2000 FA Cup Final, the last to be held at the original Wembley Stadium.

In 2002, he joined Portsmouth where he also captained the club and became the First Division Championship title and promotion to the Premier League.

With the senior team, he was capped 21 times and played at the 1992 UEFA European Championship and the 1998 FIFA World Cup.

In 2006, Merson started a column for the official Arsenal FC magazine. His primary job is on Sky Sports, reporting as well as a regular pundit for Gillette Soccer Saturday.

Further, he co-hosted 'Fantasy Football Club' on the Sky Sports TV program with John Fendley from the 2012–2015 season.

He writes a weekly column for the Daily Star's 'Seriously Football' pullout every Saturday and predicts scores for the week's premier league games called 'Merson Predicts'.

How Much Is Paul Merson's Net Worth?

Paul Merson has earned his wealth widely through his football career. As of 2021, his net worth is under review.

However, his addiction to gambling has cost him over £7million.

Merson said, "I didn’t stop until, eventually, I’d lost everything I’d ever had – close to £7 million, including houses, cars, marriages, my entire pension, and my self-respect."

Paul Merson has married thrice in his life. He first tied the knot with Lorraie. But his first marriage crumbled under his recovery from drug addiction and alcoholism. The couple divorced in 2000.

After that, he married Louise and now Kate. 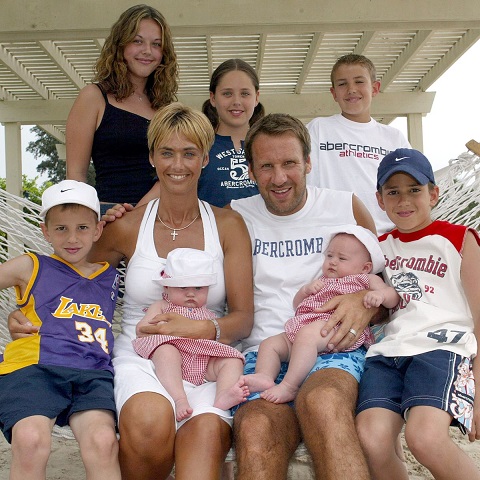 Paul is the father of eight children, including one set of twin girls.