Patrick Kaleta is an American former professional ice hockey player, who played as a right-winger in the National Hockey League (NHL) for the Buffalo Sabres from 2006 until 2015. Besides, he was drafted by the Sabres in the 6th round, 176th overall in the 2004 NHL Entry Draft.

Apart from that, Patrick is currently living a lavish lifestyle with his huge net worth of almost $4 million. Want to know further details? Then scroll down.

Patrick Kaleta Personal Life; Know about his Wife and Children

Patrick Kaleta is married to his long-time girlfriend, Ashley Kaleta. As per some sources, the duo got married in the summer of 2015 in Hamburg. Besides, Patrick revealed that they dated for a while and later got married. The couple is living happily for the past 4 years and many more to go. 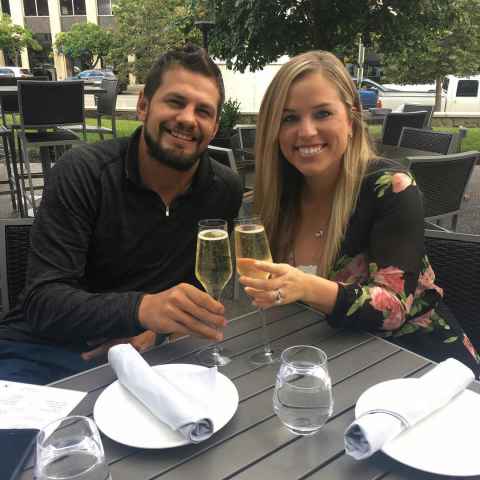 Besides, Patric announced that he and his wife are expecting a child and he also wrote: "It is the biggest goal I've scored." on his Instagram. On August 1, 2017, the couple became the parents of their first child named Cooper Patrick Kaleta.

Patrick Kaleta with his wife and son SOURCE: Instagram

Furthermore, Patrick hasn't been involved in any rumors or controversy. Likewise, He has also not been spotted with any other girls out on the public.

Patrick Kaleta stands at a perfect height of 6 feet and 1 inch tall. Besides, he has a perfectly maintained body that weighs about 93 kg.

Patrick Kaleta Net Worth and Earnings

Likewise, Patrick has been finned for many reasons, while being in the team Buffalo Sabres. The details are given below in the table:

Patrick Kaleta was born on June 8, 1986, in Angola, New York, the U.S. He grew up in the Buffalo suburb of Angola and played most of his minor hockey with Hamburg Hawks and the West Seneca Wings. He attended St. Francis High School.

Patrick holds American nationality as his parents are American and is of white ethnicity. Besides, not much is known about his family or his educational qualifications.

Patrick Kaleta debuted on February 21, 2007, partway through his professional season, he was called up from the American Hockey League (AHL)'s Rochester Americans by his parent club in Buffalo.

In his first NHL game on February 22, 2007, against the Ottawa Senators, Kaleta earned his first NHL point, an assist on a goal by Clarke MacArthur, and his first NHL fight against Ottawa's Chris Phillips. The game is best known as a brawl broke out which included Sabres head coach Lindy Ruff and Bryan Murray fighting from the benches.6