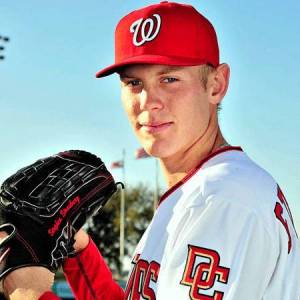 An American professional baseball pitcher, Stephen James Strasburg, is playing in the Major League Baseball for the Washington Nationals. He has been playing for Washington Nationals since he has been selected with the first pick in 2009 MLB Draft. He made his MLB debut in 2010. He is a talented pitcher and known for his pitching styles. He features four different pitches, four-seam fastball, two seam fastball, curveball and a changeup. He has the good delivery of the balls however; his pitching mechanics is not sound and synchronized as his deliveries has the great stress on his arms making him prone to elbow and shoulder injuries which has been the concern of the scouts and coaches

Stephen Strasburg was born in July 20, 1988 on San Diego, California. He had attended West Hills High School based on Santee, California. He had struggling junior career. However, his high school career was impressive. His outstanding performance against El Capitan High School drew attention of the scouts towards him. He finished his high school career with varsity letters, set School records in ERA and shutouts, been the 2006 Scholar Athlete of the Year of his school and was named the second-team all-league.

Despite his successful high school career, he was not selected in the Major League Baseball draft of that year. He wanted to enroll at Stanford University but since he was not accepted there, he went to San Diego State University playing in the college’s baseball team San Diego State Aztecs. In his collegiate freshman year, he played as a relief pitcher and later as a middle relief and then a closer. He was named as the Co-Freshman of the Year in Mountain West Conference and after playing for the Torrington Twisters of Collegiate Summer Baseball New England Collegiate Baseball League (NECBL), he was named the NECBL First Team as a closer and the top pro prospect and top relief pitcher in the league. In his sophomore year, he started playing as a full-time starting pitcher.

He was named in the United States National Baseball team on June 24, 2008 and had appeared in the 2008 World University Baseball Championship. He finished his junior career on 2009 season after he was drafted number one overall in 2009 Major League Baseball Draft by the Washington Nationals. He made his professional debut playing in the minor leagues from the club on October 16, 2009. He was named the top pitching prospect and the second best overall prospect in the end of 2009 season. It was on June 8, 2010, when he made his debut in the major league arena playing against the Pittsburgh Pirates. His debut performance was highly publicized by several of the popular sports magazines stating “the most hyped pitching debut and “Strasmas”. He gained more of the recognitions soon after he began appearing in the MLB games and delivering the outstanding performances. He stood as one of the favorite pitchers in baseball. Therefore, his jersey #37 had become the top-selling jersey in all of the baseball.

Steven Strasburg has a very good net worth and has the annual salary of 3.9 million USD as of 2013. As his pitching style has always been the concern of the coaches and scouts for being prone to injuries, he has suffered from injuries several times and been to surgeries as well making him rest for several months missing out his games.

Digging onto his personal life, he is a married man. He is married to his wife Rachel Lackey on January 9, 2010. She was his one and only till date. They had met each other at San Diego State University, where they both used to study. He has been loyal to his wife and has not been any rumor or history of his past affairs except with her. They have no any children yet but may be are planning for some time soon. Steven Strasburg credits his grandmother for his success and regards her as his inspiration. Nothing much has been disclosed about his personal stuffs as he is a discreet person, which is widely known to all the media. Wikipedia has a short biography on him. Besides, several other internet sites and social accounts like Twitter and Instagram where he is active can be the best source to collect more information on him.