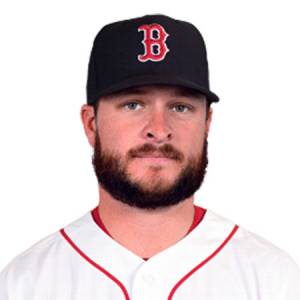 Ryan Brasier is an American professional Baseball player who plays in the Major League Baseball (MLB). As of 2019, Ryan Brasier currently plays for the Boston Red Sox as their pitcher. Ryan Brasier has played for other teams like Los Angeles Angels, Oakland Athletics, and Hiroshima Toyo Carp.

As a pitcher, Ryan Brasier reportedly earns around $535 thousand as his yearly salary from Boston Red Sox. Further, Ryan Brasier has an estimated net worth of over $4 million. Additionally, he is currently married to his beautiful wife, Shaina Brasier and shares 2 children with her.

Ryan Brasier was born on August 26, 1987, in Wichita Falls, Texas. As per his nationality, he is American and belongs to White ethnic group. Further, his star sign is Virgo. Further, the details about his parents and siblings are yet to be revealed.

Ryan Brasier Net Worth And Salary

As of 2019, Ryan Brasier has an estimated net worth of over $4 million which is quite similar to former MLB player Jeff Huson. Further, the MLB player has an average salary of $535 thousand annually while J.D. Martinez is one of the highest earners with the annual salary of $ 23.75 million.

Additionally, Ryan Brasier so far has made earnings of $749,800 from his entire MLB career while Clayton Kershaw is one of the all-time highest earners of MLB.

Some of his career contracts and earning, including bonus and incentives

Further, he is acquired by Boston Red Sox as a free agent. Furthermore, he is one of the players who receive a salary as a pre-arbitration player with reference to his service time in MLB.

Further, the MLB Player Ryan Brasier earns a good amount of money from various sponsorships which certainly helps him to gather massive net worth in coming days.

Exploring his professional career, he is a married man and currently in a marital relationship with his beautiful wife, Shaina Brasier. Further, the duo shares 2 children together, a son and a daughter.

The two met each other while attending high school, and she was part of their journey every step of the way. Further, the couple seems to be living a happy life with no rumors of divorce or separation. Additionally, there aren't any rumors about his past affairs, relationship, and girlfriend in the media yet.

Talking about his body measurement, the Famous MLB star is 6 feet 0 inches (1.83 m) in height and weighs around 93 kg.

In the sixth round of the 2007 Major League Baseball Draft, the Angels selected him. From 2007 to 2013, Brasier moved to different Angels farming teams, starting with the Orem Owlz Rookie League and reaching the Triple-A Salt Lake Bees.

Brasier signed a minor league agreement with Oakland Athletics on 7 July 2015. He spent 2015 and 2016 in the farm system of Oakland, including 46 relief appearances with the Triple-A Nashville Sounds in 2016.

On 14 December 2016, Athletics sold his contract to the Hiroshima Toyo Carp of Nippon Professional Baseball. Brasier made 26 relief appearances with the Carp in 2017; he struck 19 in 30 innings of work, walked eight and had an ERA of 3.00.

Later, Brasier signed a minor league agreement with the Boston Red Sox on 4 March 2018. Currently, he is playing along with his star team-mates like Dustin Pedroia, Rick Porcello and many more.