Justus Kane Sheffield widely recognized as Justus Sheffield is an American baseball player currently signed to the Seattle Mariners of MLB. At the 2014 MLB draft, he was picked by the Cleveland Indians in the 1st round and later was traded to the Yankees, where he made his MLB debut on 19th September 2018.

Tullahoma, Tennessee native, Sheffield was born on 13th May 1996, under the star sign Taurus. The twenty-three years old holds an American nationality and belongs to the white ethnic background.

Justus Sheffield Net Worth & Salary As Of 2020

As of 2020, Justus Sheffield has an estimated net worth of $1 million, soley earned from his MLB career.

Initially, he signed $1.6 million contracts with Cleveland Indians in 2014. He then went on to play for the various minor league under Indian, and then in 2016, he was traded to New York Yankees, where he also played in minor league until he was called up to the primary team in 2018. That season he earned $38,000.

Throughout two seasons in the MLB, he summoned $1.7 million as his career earnings.

Seattle Mariners – No. 33 pitcher, has maintained a low key personal life. For now, he is assumed to be single as there is no news or rumors regarding Sheffield being involved in a love affair. But things were not the same before. Back in 2015, he was charged with underage drinking and aggravated burglary. Reportedly, Sheffield allegedly ran into a boy named Brody Thomasson's room and began "yelling and threatening to beat him up for messing around with his girlfriend."

Later, Sheffield pleaded guilty at Coffee County Court Hues in Tullahoma, Tennessee, to charge of underage drinking as well as criminal trespass with a deferred judgment, so that the baseball player could be expunged from his record in a year.

Justus Sheffield was born to Travis Sheffield and Misty Sheffield. He has a brother, Jordan Sheffield, is also a professional baseball pitcher who currently plays for the Los Angeles Dodgers organization. 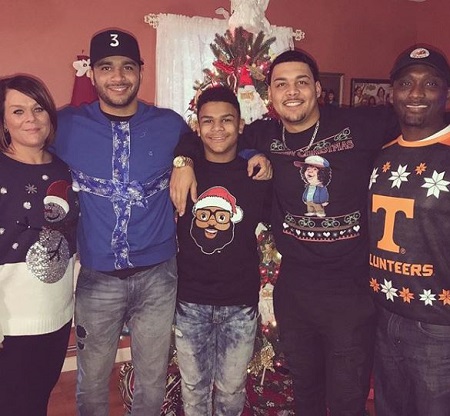 Sheffield attended Tullahoma High School in Tullahoma, Tennessee, where he won the Gatorade National Baseball Player of the Year for his play. Upon graduation, he played college baseball at Vanderbilt University as per his commitment.

At the 2014 MLB Draft, Sheffield was selected by Cleveland Indians in the first round.

On 31st July 2016, he was traded to New York Yankees alongside J.P. Feyereisen, Clint Frazier, and Ben Heller in exchange for Andrew Miller.

On 19th November 2018, Sheffield was traded to the Seattle Mariners for Dom Thompson-Williams, and Erik Swanson in exchange for James Paxton.