Named Big 12 Freshman of the Year and Second Team All-Conference, Jahmi'us Ramsey is currently playing for the Texas Tech Red Raiders of the Big 12 Conference as their basketball shooting guard. He is ranked 16th in the 2020 NBA Draft prospect ranking behind Patrick Williams and Josh Green.

Arlington, Texas native, Jahmi'us Ramsey was born on 9th June 2001, under the star sign Gemini. The eighteen years holds an American nationality and belongs to the Afro-American ethnic background. He stands 6 ft 4 in (1.93 m) tall and weighs around 195 lb (88 kg).

How Much Will Ramsey Earn, If He Goes Drafted In NBA 2020?

Texas Tech guard Jahmi’us Ramsey has not yet made a public decision regarding the 2020 NBA Draft, but according to basketball writer Jeff Goodman, he will declare for the draft by the end of the week, reported on 24th April 2020.

Jahmius Ramsey is One of the TOUGHEST GUARDS in the 2020 NBA Draft SOURCE: YouTube

Besides, he is currently playing for the college team enjoying a five-digit figure as his salary.

Is Jahmi'us Ramsey Dating? Who is his Girlfriend?

There is no story to be displayed regarding Ramsey's love life. The No. 3 – Texas Tech Red Raiders shooting guard, seems to be to the low key person when it comes to his personal life and it also can be there is no twist in his love life yet. 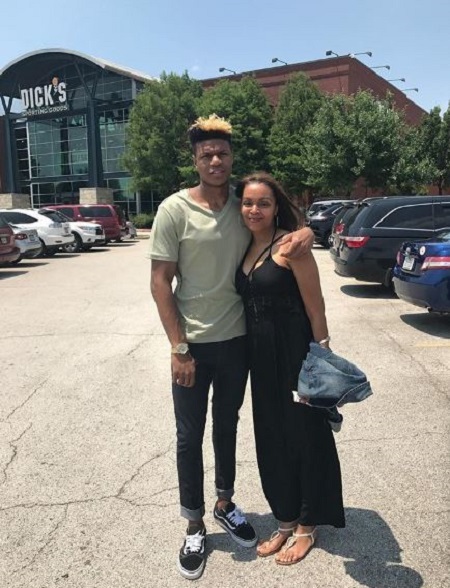 Active on Instagram with 56.2k followers, he quite is popular. His posts on the social are mostly from basketball some with his mother. The mama's boy seems to focus on his career, especially for the up-coming 2020 NBA draft. Regarding his relationship status, the hunk is single.

Jahmi'us Ramsey is the youngest son born to parents: Avery Ramsey and Falisha Bryant. He has an elder brother, Corinthian Ramsey who played basketball at Tarleton State.

In his hometown Arlington, Ramsey enrolled at Mansfield Summit High School where he played basketball for the school team as a freshman and sophomore. Entering his junior season, he was transferred to IMG Academy where he played a national schedule and began drawing more college interest.

Upon graduation from high school, he chose Texas Tech over Florida, Indiana, Memphis, Louisville, LSU, and Oregon among others. He signed with Texas Tech on Nov. 14, 2018.