Hunter Renfrow is an American football wide receiver who currently plays for the Oakland Raiders of the National Football League (NFL). While he was in college of Clemson University, he played for the Clemson Tigers football team.

Born on December 21, 1995, in Myrtle Beach, South Carolina, he was drafted by Oakland Raiders as the 149th overall pick in the fifth round of the 2019 NFL Draft.

The two times CFP national champion has earned a right amount of wealth and fame through NFL career. His estimated net worth is at around $4 million as per 2020. Hunter Renfrow signed a 4-year contract with Oakland Raiders worth$2,835,948, including a $315,948 as a signing bonus and $315,948 guaranteed.

Recently he has got an endorsement from Wilson company and in regards of a promotional campaign he made a post on his Instagram by saying,

I’m excited to have had the opportunity to help design a commemorative football to honor our 2016 National Championship win! 4-13 has a ton of significance in my life, one of my favorite bible verses has always been Philippians 4:13, I married my wife and caught the pass from Deshaun for a touchdown during the game. This project was special and it’s been awesome to be a part of it, have it cause a portion of all proceeds will go to Coach Swinney’s All In Foundation. Go Tigers!

Thuough so far the earnings from his endorsements has not been reveald yet.

The Wide receiver Hunter is a married man and is tied in a knot with Camilla Renfrow in April 2019. Hunter Renfrow and Camilla are the college Lovebirds. They started to date each other in 2014, and during that, he was a Wide Receiver for Clemson Tigers football team, whereas his present wife was a sophomore in the college.

Their wedding venue was DeBordieu, South Carolina, where famous sports personalities and Hunter's and Camillia's family and relatives had attended the ceremony.

Renfrow grew up in Myrtle Beach, South Carolina, with his six siblings.  His mother's name is Suzanne, and brother, Jordan, both of them were graduated from Clemson.

Renfrow has a big family, and his siblings Cole Renfrow, Ayers Renfrow, Chelsea Renfrow, Jordan Renfrow, Joy Renfrow. Everyone lives together, and they seem like a religious family who follows Christianity.

The wide receiver of the Oakland Raiders has multiple hobbies. During the offseasons, he likes to spend time with his play station and listening to mainstream rap songs. 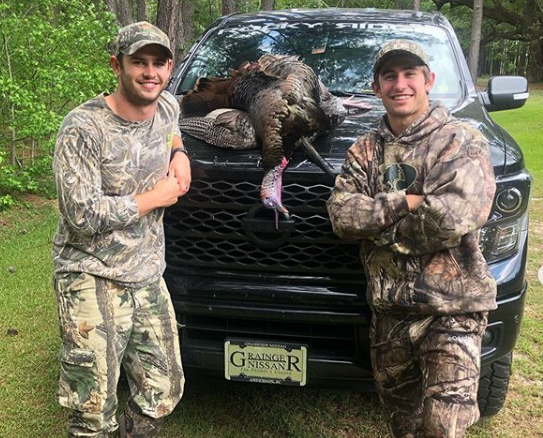 Besides all this. he loves to hunt animals, and he often went for hunting with his friend Will Swinney who is his former classmate and teammate.

Throwback to this past spring getting the first turkey and then riding into the sunset with the Rocky Ridge Titan from @graingernissananderson.