Angela Gwen Stanford better known as Angela Stanford is a professional golfer who currently competes on the LPGA Tour. She has established herself as a successful golf player and has six wins on the LPGA tour and one on Symetra tour.

As per personal life, Stanford is not married yet and is believed to be single. Furthermore, she has an estimated net worth over $7 million in 2019.

Net Worth & Incomes of Angela Stanford

Being one of the great golfers, Angela Stanford has a perfect height of 5 feet 6 inch, which is around 1.67m. She has a balanced weight of 103 lbs. Her age is 41 years old.  Recent updates can be found on her Twitter and Instagram.

This stunning golfer has shared very limited info about her personal life. Angela Stanford has not talked about her affair, dating history or marriage life. It seems she is not married and enjoying her single independent life to its fullest.

Furthermore, she also has a foundation named The Angela Stanford Foundation. It is a non-profit organization that provides scholarships to help students whose families were affected by cancer. It is a cause close to her heart since her mother has cancer as well.

Apart from her professional career, Angela Stanford has a personal interest in Baseball, American football, skiing, and traveling. She admires the game and performance of Martin Piller who is a great golf player. Her favorite NFL player is Dark Prescott. Moreover, she is the supporter of the Texans Christian University Basketball team’s.

Angela Stanford was born to American parents Nan and Steve Stanford on November 28, 1977, in Fort Worth, Texas. She is of American nationality and her ethnicity is white. Born in late November, her zodiac sign is Sagittarius.

He we are!!! #Itstime #Derek&Laura

Angela Stanford won several junior championships in her early years. She was the winner of Fort Worth Girls Championship four times, the 1996 Texas 4A High School Championship and the 1996 PING Texas State Junior Championship.

She later enrolled at Boswell High School before moving to Texas Christian University in Fort Worth. She bagged several awards in the game of golf during her collegiate years.

Angela Stanford turned professional in 2000, competed in U.S. Women’s Amateur in August, and performed on the Futures Tour, where she accomplished a victory at the season-ending event in the early October.

In 2001, she finished fourth in the LPGA Final Qualifying Tournament. She then achieved her first win on the LPGA Tour that came in her third season at the 2003 ShopRite LPGA Classic. 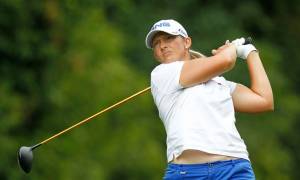 Ben Sosoli Ben Sosoli's MMA Career Record and UFC Fights; How much does he Earn per Fight?