Alex Len is a Ukrainian professional basketball player. He currently plays for the Atlanta Hawks of the National Basketball Association (NBA).

Len is ranked in #25 and plays the positions as Power forward as well as center. Len played college basketball for Maryland Terrapins of the Atlantic Coast Conference before being drafted to NBA. Moreover, he is also a member of the Ukraine National Basketball team.

Alex Len was born on 16th June 1993, in Antratsyt, Ukraine. Len was raised by his mother Julia Len. He grew up along with his sibling, sister Anna Shaposhnikova. Lenn belongs to a Ukrainian nationality.

Before being drafted to NBA, Alex Len played two seasons for the Maryland Terrapins of the Atlantic Coast Conference. Moreover, he also played a season for Dnipro in his home nation's top professional basketball league.

During his sophomore year at college basketball, Len averaged 11.9 points per game in 38 total games. Len was drafted by Phoenix Suns in the 2013 NBA draft with 5th overall pick. However, Len did not join the 2013 NBA Summer League due to ankle surgeries. Len made his NBA debut on 1st November 2013 in a match against Utah Jazz.

Alex Len is an unmarried man. However, Len is dating his long-term girlfriend Essence Townsend. His girlfriend is also a basketball as well as a model. The couple has been dating for long but yet, they haven't mentioned the actual date when they began dating. 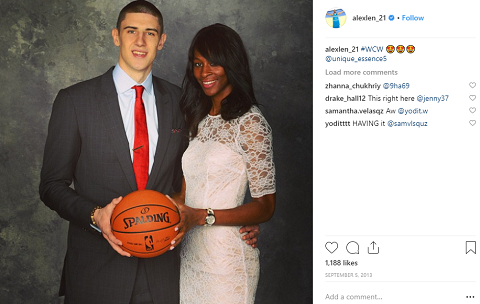 Len is successfully maintaining his profession as well as love life. The lovebirds often spend their time together and further makes public appearances together. Len frequently shares adorable photos of his partner in his Instagram.

Although the couple is dating for long, neither Len nor Essence have mentioned any plans of getting engaged or married. So far, the pair hasn't been the part of controversy regarding their breakup. Besides this, Len hasn't been in any other relationships.

Alex Len Net worth and Salary

As of 2018, the estimated net worth of Alex Len is around $4 million. From his career as a professional basketball player, Len earns a fortunate amount of money. Len currently plays for the Atlanta Hawks. On 3rd August 2018, Len signed a two-year contract with Hawks for $8.5 million.

As per the contract Len gets paid an average annual salary of $4,255,00 and the base salary of $4,350,000. Likewise, he previously played for the Phoenix Suns. On the other hand, Len further adds money from his National Basketball team career.