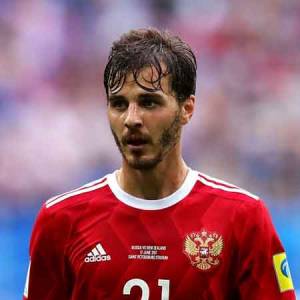 Yerokhin has played for the Russian team in their youth teams and made his international debut for Russia in 2016. He also represented Russia at the UEFA Euro 2016.

Aleksandr Yerokhin was born on 13 October 1989 in Barnaul, Soviet Union, modern day Russia. He is of Russian nationality.

He was fond of playing football since his early childhood days and played at the youth clubs of Russian teams like Dynamo  Barnaul and Lokomotiv Moscow.

Aleksandr Yerokhin’s Net worth and Salary

His annual salary is estimated to be around $ 1 million from playing for his current football club, Zenit St Petersburg and his current market worth has not been disclosed.

So looking at his professional playing career, his net worth is estimated at around $ 2 million.

He started his senior playing career with Moldovian professional football club, Sheriff Tiraspol in 2007, he later went on to become the prominent player in 2009.

Yerokhin signed a permanent contract with the club in the 2013/14 season and played for Russian football clubs such as Ural Yekaterinburg and Rostov.

He signed a three-year contract with Russian Premier League club, FC Zenit Saint  Petersburg in the summer of 2017 and currently playing for the club.

After playing for the under 19 Russian team, he was initially called by senior Russian national team for the UEFA Euro 2016 Qualifiers against Sweden and Liechtenstein.

He made his full senior international debut for Russia against Turkey in a friendly match played on 31  August 2016.

After being added to the Russian extended squad of Russia 2018 FIFA World squad led by a captain, Igor Akinfeev that had players such as midfielder, Denis Cheryshev, and striker, Artem Dzyuba and was added to the final team of Russia on June 3, 2018.

Currently, 28, the Russian midfielder, Aleksandr Yerokhin stands at a height of 6 feet 3 inches tall and weighs around 79 kg.

He is happily married to his spouse, Veronika Yerokhina. The couple tied their wedding knots in 2011 and couple are enjoying a happy and blissful life.