If you love watching golf then, Padraig Harrington must not be a new name. Padraig is a well-known Irish professional golf player. He has been playing at the professional level since 1995. Harrington started playing in the PGA Tour in 2005 and joined European Tour in 1996. Padraig has won thirty-one professional events in his career.

Padraig Harrington was born Pádraig Peter Harrington on August 31, 1971, in Dublin, County Dublin. He is among the five children born to Patrick Harrington and his wife, Breda Harrington. His father played Gaelic football for the Cork and also was a boxer and hurler. Padraig stands six feet and one inch tall and weighs 83 kg.

Padraig Harrington has an estimated net worth of more than $20 Million. He is one of the oldest active golf players currently playing on the PGA Tour. Padraig is ranked at No.60 in the all-time Money list of Leaders in golf, whereas Tiger Woods Tops the list with more than $120 Million. Harrington has earned most of his net worth through his career in the PGA and European Tour. 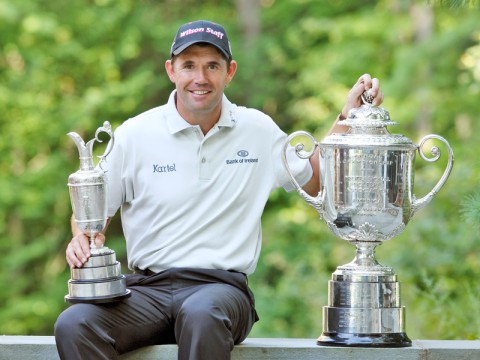 Padraig along with the PGA Championship Title SOURCE: Golf Monthly

In the 2007/8 season, Harrington earned $4,313,551 when he won two events and made cuts in twelve games out of fifteen events played. His earnings for the season remain his Highest earnings in a season to date. Padraig made a comeback in the ongoing season and has already earned $1,083,198 from just thirteen events. Totaling his earnings from PGA Tour, It sums to $26,029,270 from 321 games. Padraig has a sponsorship deals with Clune Construction, Dunnes Stores, Footjoy, Golf Ireland, and many more and must be making millions from these sponsors. Another golfer who won the European tour two times Sam Horsfield has a net worth of €1.8million.

Padraig Harrington is married to his childhood friend, Caroline Harrington. They love birds walked down their wedding aisle in 1997 in a private wedding ceremony in their hometown. In 2003, They welcomed their first child, Patrick. In November 2007, The family of three extended to four after being blessed with their second child, Ciaran. 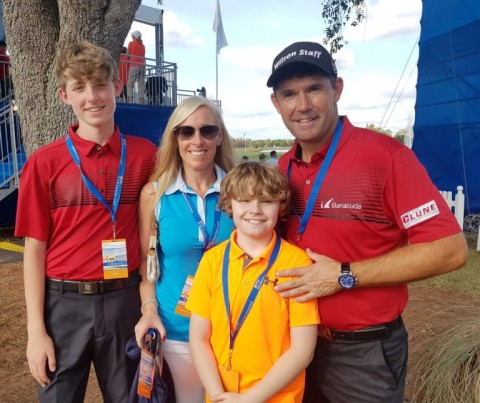 Padraig, along with his wife their two children SOURCE: Tour Miss

It's been more than two decades of their marriage, and there have been no rumors of the couple having ups and downs in their married life. Caroline is very much supportive of her husband.

Padraig played numerous amateur events and also won a lot of tournaments before turning professional in 1995. He has played in almost every event globally. Harrington won his first major PGA title in 2007, winning the Open Championship. He is among the few other golf players to defend the Open Championship title.

Harrington has won thirty-one professional events to date, including fifteen of them are from European Tour, six from PGA Tour, one from Japan Golf Tour, Four from Asian Tour, and ten from others. He was ranked at No. 3 in July 2008, his highest ranking in golf. Padraig was the captain of the European team for the 2020 Ryder Cup.