Nuno Mendes is a pro footballer player from Portugal who currently plays for Ligue 1 club Paris Saint-German and Portugal national team as a Left-back. In his club career, he has just played for Portuguese and French, such as Porto and Paris Saint-German. In contrast, he has contributed to his national team since 2018. As of today, Nuno has recored seven international matches for Portugal's senior squad. For your info, he is  Primeira Liga 2020-21, Taca da Liga 2020-21, Liga 1 2021-22, and Trophee des Champions 2022 winner.

Nuno Mendes was born under the family name Nuno Alexandre Tavares Mendes on 19 June 2002 in Sintra, Portugal. Also, he is known by the nickname Kandimba. His age now is just 20 years, and his star sign per astrology is Gemini. His height is 5 ft 9 inches, and he weighs over 70 kg. The left-footed defender Nuno is Portuguese by nationality and Christianity by religion. Cristiano Ronaldo, Lionel Messi, Marcelo, and David Alaba are his idols while growing up.

Nuno Mendes's birth took place in a middle-class family. His family thrived him with good manners and well-needed soccer facilities, knowing his son's interest. Although born in Sintra, Portugal, Nuno's ancestors are of Angolan descent, meaning they are from African roots. Like him, his parents are also Christain.

As of today, he has not mentioned thier name anywhere, so it is still unknown at the moment. Moreover, he came into this world as the second son of his parents. Along with him, Nuno has an elder brother with whom he shares a good relationship. His brother was also a guardian to him who always had his back since boyhood. Regardless his details are still secreted like his parents.

Know about Nuno's perennial earnings and net worth

Nuno Mendes is the fastest-growing rising player in the meantime. At age 20, he competes in the world's best League with his childhood idol Lionel Messi. Because of his extraordinary football capabilities, Nuno has a great career at a very early age. Keep in mind that he is just 20 years old, and at 20 only, he is already earning £8,900 in a week and £4,62,800 a year from his current team. There is no doubt that the Portuguese wunderkind is undoubtedly a future millionaire. 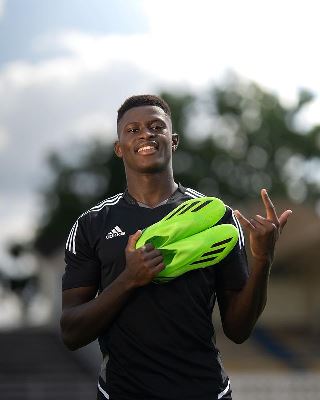 According to Salary Sport, his estimated net worth is around £8,19,520. From his professional income, he ensures his family's financial aid and quality living standard. On top of that, he is a brand ambassador of the famous sporting brand Adidas which also makes massive forts into his net for his job. He is considered one of the most expensive rising players, with a market value of €40 million.

Is he dating anyone? Relationship status

2021-22 Ligue 1 Champion Nuno Mendes prefers to keep his love matter confidential. He has kept his life low-key. As a result, any details on his dating or relationship status are unknown to the public. On top of that, Nuno has no record of dating life with any girl so far. Due to this, he is believed to be single currently. He is utterly dedicated to his career and has no time for such things.

Before Sporting, he was linked to Despertar, where he played a year for the team. Nuno was enrolled in the Sporting football academy at the age of nine years. He played from 2012 to 2020 as a youth player of Sporting. Nuno initially served as an attacking midfielder playing as a left-back. He professionally joined the senior level in 2020 as a senior Sporting player. He was one of the young players to be called to the first team by manager Ruben Amorim. 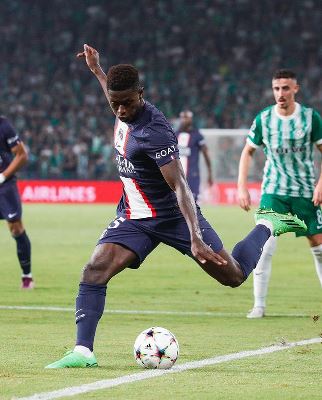 He continued to play as a left-back, joining the Sporting first team. He made his first appearance for Sporting against Pacos de Ferreria on 12 June 2020 as a substitute player entered the pitch in the 72 minutes replacing Marcos Acuna. A year later, he joined the French giant club PSG on a season-long deal on 31 August 2021. A month on 11 th day of September, he made his Ligue 1 debut in a clash with Clermont. At PSG, he was nominated as Young Player of the Year and named to the Team of the Year.

Completing his loan deal, PSG signed Nuno permanently on a fee of €40 million till 30 June 2026. The future star also won the Ligue 1 title in his debut season with the club. After his new contract extension, he has just played seven matches for the PSG in the 2022-23 season.

He made his international debut for Portugal in 2015. Also, he has already been a Portugal youth player at all cross-levels since 2018. He has a cap on his name at U 21 level. So far, he has appeared in 33 matches for Portugal, including his youth and senior team matches. However, he has contributed to nine world cup qualifying games. Also, he is a highly eligible contender for the Portugal squad of the upcoming 2022 FIFA World Cup.

Nuni Mendes is avaibal eon Instagram, witter and Facebook. He seems pretty active on his social media handles. By the Instagram username @nunomendes_5, he has 616K followers. He has 188 Post, and it's all his soccer-related photos. Likewise, his Twitter handle is @Nuno Mendes. Through these, he updates his fans about his personal and career news and events.

Visit Playerswiki for more exciting news, gossip, and bio of your favorite players.